How To Use Astrology To Predict The Future 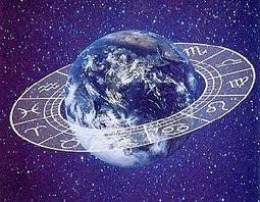 The stars shed their light upon humanity, but they do not touch us. They are simply too far away from us for their gravity to reach us individually. Even the Moon is minuscule in effect beside the sun, and distant planets like Neptune create no effect that we can measure. The rest of the galaxy is much too far away for us to feel individual movements from Alpha Centauri or Betegeuse. Instead, the universe creates a sort of ocean of gravity that our galaxy, our solar system, and the Earth all hurtle through. Some of us are no more aware of the web of gravity that surrounds us than a fish knows it is in the water.

As with any large body of water, there are currents. The wise have learned to recognize the consistent patterns of the universe and to interpret their effects through the ancient system of astrology. Patterns in human life and fate have repeated themselves, time and again, since the days of the ancients. Back when humanity lived much closer to nature's cycles of life and death it was possible for a careful observer to watch the dance of birth and mortality several times a day. Agricultural communities were filled with hundreds of living things, both animal and human, who all lived out their lives and fulfill their destinies under the influence of the stars and the seasons and the eyes of the astrologers. Plants and animals are no less controlled by the laws of fate than people. This was a fertile laboratory for the study of fate and the future. After generations of such experience, folk traditions arose that incorporated this tremendous trove of human wisdom into the lore of astrology. The knowledge that astrology grants of the future is rooted in the past. We have a fairly good idea what happens next because we have been such careful observers of what has happened before.

Astrology is no more accurate than a weather forecast, but it is no less accurate either. The science of climatology has grown out of decades of reporting and recording the weather around the world. It allows us to make certain assumptions about the weather tomorrow. The circumstances, location, season, and pattern of weather leading up to the moment are all taken into the account, and a reasonable judgement about the next day's pattern is made. As the science gathers data and divines deeper and deeper patterns within the Earth's weather the predictions of climatology gradually grow more accurate. Astrology is much the same.

The only way to use astrology to predict the future is to make a careful and thorough study of the past. All astrological knowledge requires a tradition in order to act as context and source. Although there are many different types of astrology from varying civilizations and traditions, please do not take this to mean that only one is correct. They are all pieces of the puzzle. All deserve careful attention and study. There are Chinese, Indian, Mayan, Dogon, and a hundred other types of astrology, in addition to the familiar one derived from the Greeks and Babylonians. The only way to understand their wisdom is to study them deeply.

There is no practical limit to the amount of information available to astrologers. Experience and observation must be supplemented with intensive reading and learning. This does not mean Western astrology or esoteric astrology alone. Rather, a serious astrologer will study everything available to them. Science is proving more and more astrological predictions to be true. For example, it is now known through extensive surveys in Denmark and the USA that there are more children born with forms of Attention Deficit Disorder between late March and early April. This squares neatly with astrology, which has always taught that Aries are impetuous and active. The key to incorporating the wealth of new scientific knowledge into the astrological tradition is the understanding of the basic languages of astrology and science. Once that is achieved it becomes easy to translate one into the other and the world opens up to the student.

The ephemeris and the astrolabe are useless without the knowledge to understand them. Only persistent study can give you such depth of understanding of the conditions of the stars in the past and the reflection of their events on Earth that you can begin to pierce the clouds that shroud the future. It has been said that there is nothing new under the sun. This is certainly true in astrology. Although each moment seems undiscovered and new, that is only because our vision of the past and the future is limited. It has all happened before and it will all happen again. Astrology gives us the tools that we need to truly understand it. The wisdom encoded in the ancient art of astrology creates a metaphorical telescope, with which we can look at distant stars and see what is on its way to us.

There is a deeper tide to human affairs, just as there are organizing principles in the tides and the rain. Some parts of it are more complex than others, but there is no limit to what human knowledge can discern. With the intelligent study of astrology the general pattern of the future becomes surprisingly clear and the stars transform into faithful guides.