Who Was John Dee? 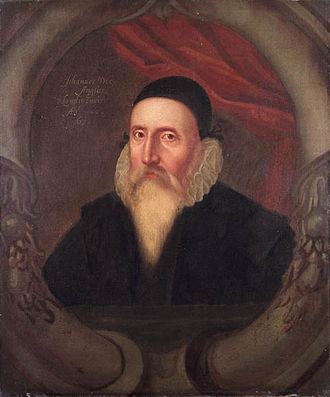 John Dee was a brilliant 16th century visionary, whose pioneering contributions to fields both psychic and scientific were unparalleled in his time and influential to this day.

Queen Mary's astrologer, Queen Elizabeth's tutor and scientific adviser, Euclidian lecturer and translator, this important and enlightened scholar is even said to be the inspiration for Shakespeare's “Prospero” character.

Dee’s precocious perception and prescience were evident from an early age, as he entered university at age 15 and was made a fellow of Trinity College whilst still in his teens.

In his twenties, he traveled Europe, convening and conferring with top continental mathemeticians and cartographers, foremost among them the Flanders-born philosopher Gerardus Mercator. Dee would eventually expand upon what he'd learned from Mercator, inventing new navigational instruments and strategies to employ in plotting routes through frigid zones.

Dee declined professorship offers at the University of Oxford and the University of Paris in the early 1550s, and returned to England opting instead to focus on his writing. He might have regretted that decision in 1555 when he was jailed on charges of “conjuring” and “calculating,” which marked the start of a continuing crusade against him by certain circles and those in positions of power.

However, after pleading his case to court he was soon released and set about toward constructing a personal library, expanding it until it became England's largest collection of manuscripts, books and records.

Dee's desire for a higher position in the royal court came to fruition as Elizabeth I ascended to the throne in 1558. His influence as her psychic, tutor and adviser was so great that he was even the one to choose her coronation date, based on his astrological advising.

In the next two decades, most of Dee's energy was directed toward parlaying his knowledge of Euclidian geometry into navigational reality, training and charting many seafarers' voyages of discovery as England sought to explore (and eventually colonize) the New World.

Dee himself was the first to use the terms “British Empire” and “Britannia”, as he published his General and Rare Memorials pertayning to the Perfect Arte of Navigation, in which he aimed to eventually implement a plan by which maritime empiricism would lead to the solidifying of English territorial discoveries and claims.

The late 1570s were the time when John Dee really dug into more psychic and spiritual realms, although he would never compartmentalize them as such; to Dee, all of his intellectual and spiritual pursuits were grouped into what he called the “pure verities”, which were all an investigation toward understanding the invisible using all the cognitive tools at his disposal.

For Dee, the world of numbers and the world of the occult both offered glimpses into the world of the divine. And indeed, though such a unified view of matters traditionally divided into “scientific” and “psychic” categories became a driving force for Dee in his fifties, one can even see the idea taking shape in his earlier works.

In 1558 he had offered views of astrology in his Propaedeumata Aphoristica, while his nascent notion that the magical and mathematical can provide insights into the unified nature of the universe can be seen in 1564's Monas hieroglyphica.

Dee's populist preface to a translation of Euclid's Elements, which he also edited, was a powerful and popular testimonial, advocating the far-reaching influence of mathematics into the corners of the arts, the sciences and the universe as a whole.

In the 1570s, as he became dissatisfied by the limitations of the traditional sciences to peer into the realm of the divine, Dee delved more into the supernatural, using an Aztec/Mayan obsidian stone to attempt to commune with the angels. Today that very stone sits in the British Museum alongside his scrying and conjuring table.

Initially seeking but struggling to find clarity, his fortunes took a turn in 1582 as he met spiritual medium Sir Edward Kelley, with whom Dee decided to devote the majority of his time to investigation of the supernatural. Dee kept a detailed diary of what he termed his “angelic conferences,” during which fasting and prayer also came to the fore.

Beginning in 1583, Dee and Kelley embarked on a nomadic trek throughout Central Europe, meeting with kings and emperors in attempting to impress upon them the value of his angelic audiences. Dee tirelessly recorded his spiritual conferences in his “Enochian language,” which he says was imparted upon them by the angels and was named after the last person whom Dee purported knew the language before himself and Kelley.

This transmundane team came to an unfortunate end, however, when Kelley — by then a budding alchemist who may have been seeking a separation from Dee — suggested the two share their wives, after which Dee broke off contact with the man in 1589, never to see him again.

Sadly, Dee died in poverty at the age of 82, tended to by his daughter Katherine, one of his eight children by his second marriage.

Dee's impact may not have been fully appreciated at the time, but resounds unto today. He fervently believed that numbers provided the language through which we could access the divine. His navigational guidance and instructions to maritime captains of his time shaped the world as we know it today.

His devotion to Hermeticism, a doctrine which purports a single truth exists across all religions and was given to mankind by God in Homeric times, was a unifying thread throughout his life and works.

Though he may not have succeeded in his goal to unite all religions through a pure, numerically-derived and unified theology, he is currently hailed as one of the most learned men of his times.

Alchemist, occultist, herbalist, his enduring devotion and divination ensured a lasting legacy. For not only was he the inspiration for Shakespeare's Prospero character in The Tempest, he's also been cast in more contemporary roles, from a detective in Phil Rickman's The Bones of Avalon to the titular character in a modern English opera. He's even the subject of heavy metal band Iron Maiden's 2010 anthem “The Alchemist”!

Yes, through tempest and tumult and from prominence to penury, Dee's adherence to astrology, astronomy and mathematical principles makes him one of the most renowned psychics in both Elizabethan and present-day times.