Who Was Jeane Dixon? 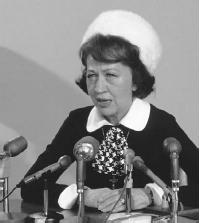 Jeane Dixon was one of the most famous astrologers that this country has ever seen. She ran a syndicated astrology column in newspapers, wrote numerous books, and made some of the most talked about predictions of all times. Her legacy will stand the test of time, even after her passing in January 1997.

Jeane Dixon was born under the name Lydia Emma Pinckert to an ordinary family. She discovered her psychic ability at a young age after a gypsy explained her special abilities. Dixon began telling predictions about famous people including the death of movie star Carol Lombard. It has been noted that Dixon told Lombard to beware of flying. Lombard ignored this advice and died a short while later in a plane crash. As she entered adulthood, Dixon changed her name and was married twice. Her second husband began a real estate career in Washington D.C., where numerous soldiers and veterans lived at the time of war. At this point, Dixon used her “gift from God” to entertain the troops with her fortune telling ability.

One of the first and most famous prediction that Dixon ever delivered was that President John F. Kennedy would be killed while in office. Her words stated that the president who was elected in 1960 would die in Dallas, Texas. She described this man as young, tall, and blue-eyed. Despite the fact that she also predicted a victory for Richard Nixon, this prediction sent her notoriety soaring. It was definitely the turning point in her career as a psychic.

At the height of her popularity, she became the subject of a book by Ruth Montgomery with the title of “A Gift Of Prophecy: The Phenomenal Jean Dixon.” The book was a best seller and sold millions of copies. It included a great number of Dixon's predictions that came true. Her wrong predictions were not part of the copy. This book was a major boost to the already popular life of Dixon.

Besides lecturing, Dixon began to write books on her own. She wrote seven books that were based on psychic phenomena. She was able to cover various topics concerning the spiritual and psychic world. She was famed for her astrological cookbooks and animal horoscopes as well. More and more people became interested in what she had to say. She had a thorough belief in extra-sensory perception and became a popular figure in high society Washington circles. Her high regard led her to be one of the leading psychics that celebrities called on for spiritual guidance. For example, Nancy and Ronald Reagan used her advice on numerous occasions while Reagan was in office. Before this time, President Nixon also followed her predictions, but at a distance. In fact, he set up a meeting at the White House to guard against terrorism during the Munich Massacre because of her premonitions.

To her credit, Dixon made quite a few predictions that turned out to be correct. Each year, she publicized many different predictions. Even though her words were often vaguely phrased, she accurately predicted the death of Franklin Roosevelt. She also claimed that Winston Churchill would lose the 1945 election, but would return to the part of prime minister at a later time. She also predicted that the Korean War would end in impasse, and Joseph Stalin would die in 1953. Other correct predictions include the death of U.N. Security General Dag Hammarskjold and three U.S. astronauts during the Apollo run in 1967. These were some of her most well received predictions that are still remembered today.

Even though she had foretold things that did come true, she also failed many times by giving inaccurate predictions. Some of her worst prophecies stated that there would be a WWIII in 1958, and Russia would be the first country to land a person on the moon. Her later predictions called for a holocaust in the 1980s as the Roman Empire was to rise and become the center of Middle Eastern culture. She also predicted a cure for cancer would be developed, and world peace would occur by 2000. When questioned about these predictions, she claimed that they may have been inaccurately interpreted, but not a negative reflection of her abilities.

Dixon had great public popularity, but her life did not always go smoothly. She was victim of many skeptics who questioned and attacked her character. She was called a fraud by many people who did not believe that she had actual powers. She was often the joke behind tabloids and non-believers. She was once analyzed by a college mathematician who coined the phrase “Jeane Dixon Effect” to describe her career and the career of most famous psychics. This phrase explains that the media tends to magnify correct predictions that are made in order to validate a person's psychic powers. On the other hand, inaccurate predictions are often brushed under the rug, so the public forgets them.

Dixon constantly made large amounts of predictions, so some were bound to come true. Only the true predictions were ever emphasized in the press. This bolstering of her accurate predictions is what made her famous. The same can be said for other psychics as well. “The Jeane Dixon Effect” has been fought by many people who believe wholeheartedly in the psychic ability of Jeane Dixon and others.

Jeane Dixon died in January 1997 in Washington D.C. from cardiac arrest. She managed to live a long life guiding people through a spiritual medium. She had an extremely colorful personality, which has made her one of the most well known psychics of the past century. Her name is one of the first to come to mind when a person begins the study of astrology or any related field. Today, there are still numerous astrologers and psychics that exist in the media. However, Dixon was one of the first people to pave the way in the industry to make predictions an interesting part of society. She will always hold a key role in the psychic community.