10 Places With Haunted And Paranormal Activity in Philadelphia 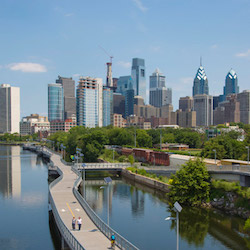 Have you ever wanted to experience spirits for yourself? Whether you believe in spirits or not, there is often a fascination and a sense of curiosity that makes you wonder about the subject.

Growing up in Pennsylvania, I always felt a strong connection to the spirits, and let me tell you, Philadelphia is a place where a lot of them can be found. If you are not attuned to spiritual energy, you may not notice how ripe the city is, but there are a few locations where the spiritual energy is stronger than others.

Independence Hall: This is a historical location where you can often see the spirits of a lot of the historic figures who resided in this area. They are difficult to pinpoint due to the amount of tourists that visit this site, but I have seen them there, so make sure to take a look.

Fort Mifflin: This is the sight of one of the battlefields of the Revolutionary war. Here you will encounter the spirits of soldiers; in fact, screams can sometimes be heard at this location.

Eastern State Penitentiary: This site is a prison that holds a lot of spiritual energy, though the energy found here is not all positive energy. It is open for tours all year, but it is designed as more of a haunted tour during the month of October. The ghost sightings seen here have been going on since 1940, and they became even more prevalent since the prison was abandoned more than 40 years ago.

Baleroy Mansion: This mansion is a 103 year old building where the spirit of Thomas Jefferson has been seen on more than one occasion. The home contains about 30 rooms, each of which are said to be haunted, and there is even one room that holds a death chair in its midst. I have heard that many individuals who sat on this chair died shortly after their visit to the estate, so make sure to avoid this resting place when you stop by.

Allen Lane: This is known to be one of the most haunted areas in Philadelphia’s Mount Airy area. In fact, the spirit of the headless horseman is said to still roam the street.

The General Wayne Inn: This building has a history that goes all the way back to the year 1704, so there is plenty of spiritual activity in this inn. In fact, in 1996, one of the co-owners murdered his partner and his wife committed suicide. Many soldiers haunt the inn, and if you are looking to locate more of a historical spirit, Edgar Allen Poe haunts the place that he frequented while he was amongst the living.

Grumblethorope: This estate was home to the battle of Germantown, so it is permanently stained by the blood of a British soldier, and his spirit still haunts the parlor today. In addition, the estate was home to a girl named Justinia during the period that the yellow fever was prevalent. Many individuals who have visited this site have smelled dough, which implies that her spirit is still on the estate since she loved to bake.

The Philadelphia Zoo: The John Penn House that is located within the zoo is a location that is haunted by spirits. In fact, a lady in a white dress can often be seen standing at the top of the staircase. The Pennrose building and the Treehouse in the zoo have also been locations where spiritual activity has been felt.

Pennhurst Asylum: This is a former insane asylum that was open over a century ago in 1908. The spirits of those who died are said to walk the halls, but simply walking through an insane asylum is frightening enough for some. During the month of October, there are haunted house style tours of the Pennhurst Asylum as well.

If your curiosity has you looking for locations where paranormal activity has been spotted, then Philadelphia is the city to explore.

PS – If you happen to visit any of these haunted locations in Philadelphia, share your experience in the comment section below!