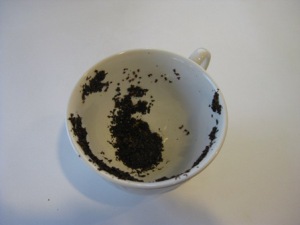 Tasseography is one of the oldest forms of divination in the world. It refers to any type of divination that involves reading tea leaves or similar substances to tell the future. While many people are not familiar with the word, almost everyone has heard about telling fortunes using tea leaves. Tasseography, however, may also refer to using other substances such as coffee grinds or wine sediments. This is a practice that has been used, in one form or another, in many parts of the world.

Tasseography, which is also known as tassology or tasseomancy, is a type of divination that uses patterns to understand the world or predict future events. Although it generally refers to reading tea leaves, other substances such as coffee grinds can also be used. There are other forms of divination that use patterns that are even older and that have different names.

Shamans from various parts of the world as well as the ancient Romans, for example, used animal entrails for divination. Although the principle of this type of divination is similar to tasseography, this is known as extispicy, a practice that has its origins in the religion of the Etruscans. Another related form of divination uses patterns found in hot wax. This is called carromancy. Clouds can also be used for divination. This is known as cloud scrying or nephelomancy.

Extispicy, carromancy, nephelomancy and tasseography are all based on the idea that seemingly random patterns actually have meaning for the person who knows how to read these patterns. The idea that patterns can reveal meaningful facts about the world and human events is an ancient belief. People who read tea leaves are believed to have certain psychic or intuitive powers that allow them to interpret the patterns. So such a reading depends on both the tea leaves and the skill of the reader.

As noted, the idea of using patterns for divination goes back to ancient and possibly even prehistoric times. Tea-leaf divination was practiced in China and Japan. It may also have roots among the Romany or Gypsies as well as among ancient Celts. Tea leaf reading, however, became popular in the Western world in the 18th and 19th centuries. This is when tea, shipped from China, became a popular beverage in England.

The first book on tea leaf reading was published in England in the 18th century. It was called Tea-Cup Reading and Fortune-Telling by Tea Leaves, by a Highland Seer. This book has been in and out of print over the centuries, but you can find several modern reprints for sale today. You can even find this classic work for free on Guttenberg.org.

When this anonymous book was written, however, tea was still mainly consumed by the aristocratic classes. Gradually, however, tea became a beverage that was universally consumed in England. This opened the door to people of all classes learning about tea divination.

Tea-leaf reading reached the height of popularity in the 19th century, during the Victorian era. This was a period when there was widespread fascination with metaphysics and the occult in general. Practices such as mediumship, reading cards and other practices were widely practiced during this time. Tea leaves provided a simple form of divination that could be done by anyone.

Tasseography can be practiced in a number of ways. The following is one way to use the method, using tea leaves.

While tea-leaf reading is the best-known form of tasseography, other forms are used as well. The next most popular type uses coffee grinds. While the basic principles are the same regardless of what type of substance is used, divination with coffee grinds has its own history.

While tea drinking has its origins in Asia and spread to Europe, coffee was first consumed in North Africa and the Middle East. Using coffee grinds to predict the future has been used by cultures such as the Turks. The Turkish method of preparing coffee is well suited to divination, as the coffee is boiled directly into the water.

According to Turkish tradition, coffee grinds are interpreted based on what part of the cup they appear. The cup is divided into parts, with the lower half representing the past and the top the future. The left side is considered negative and the right side positive.

How to Interpret Patterns

Some people read their own tea leaves. Others do so for friends or family members. Then there are psychics who do readings for a living. In all cases, the essential task of tasseography is to interpret patterns. This requires the reader to use both logic and intuition. This is similar to the method used in psychology called the Rorschach Inkblot Test, where subjects interpret a series of inkblot patterns. Psychologists use these responses to reach conclusions about the mental states of patients. Tasseography, of course, is much older than the Rorschach Test.

Some symbols are fairly obvious. If you see, for example, a vehicle such as a car or ship, this might signify a trip. Seeing certain animals suggest the qualities that are associated with those animals. Today a person preparing for a long trip is likely to see a car or airplane. One hundred years ago a horse or ship would have signified something similar.

Symbols can have special meaning to individuals. For example, seeing a tree would not necessarily signify the same thing for everyone. It might remind one person of a tree that stood outside his childhood home. For someone else, it might have a more esoteric meaning, such as the Tree of Life. A dog might represent friendship and loyalty to one person. To someone who has a fear of dogs, meanwhile, a dog might be considered an omen of violence.

The meaning of symbols also changes over time and from culture to culture. In some cultures, for example, cats are considered good luck while in others they are creatures of ill omen.

Comparing Tasseography to Other Forms of Divination

Divination is as old as human civilization. Tasseography is only one method that various cultures have used to gain insights into the cosmos. We’ve already seen how reading tea leaves and coffee grinds is comparable to other methods such as interpreting animal entrails, clouds or wax. Tasseography may also be compared to forms of divination that use cards, coins, runes or other instruments.

Compared to all of these methods, however, tasseography is actually more subjective. While the meaning of a card or an I Ching hexagram is open to interpretation, there are fairly agreed upon meanings. The symbols found in tea leaves, however, rely far more on the eyes, imagination and intuition of the reader.

Still another popular method of divination that is comparable to tasseography is crystal gazing. This is the method associated with Gypsies and storefront psychics who gaze into a crystal ball to see the future. This method is arguably even more subjective than tasseography, as the reader must use psychic vision to “see” the future.

Tasseography is more of an art than a science. Like any form of divination, it’s difficult to prove whether or not it works. Because patterns seen in a cup of tea or coffee are open to many interpretations, no two readers will see things in precisely the same way.

A skeptic might object that people simply project their own state of mind onto the tea leaves and see a pattern that’s not really there. Similar objections are raised to every form of divination. This does not really invalidate the process, though. The tea leaves or coffee grinds are not endowed with supernatural powers. They are merely a tool that the reader uses to stimulate his or her own abilities.

Whether the information that comes up during readings is from the unconscious mind of the reader, the collective unconscious, God or spirits who are hovering nearby is a question that can be endlessly debated. The fact is, some people find comfort and wisdom in such forms of divination. For those who believe in it, tasseography can provide insights into human nature and future events.