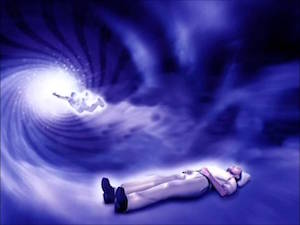 In clinical terms, astral projection is how we interpret out-of-body experiences.

Out-of-body defines the idea of being separated from one's physical form.

The typical recounting of this phenomenon is floating outside of one's self, actually observing the events around yourself from a distance and not being able to communicate or participate.

The concept of astral projection is as old as organized civilization, as old as the following of karma and reincarnation. Leaving one's body while in a dream state has been recorded by all types of people in all times and cultures.

The truth is establishing that astral projection came from somewhere would be difficult. The idea that something as universal as an out-of-body experience can be attributed to a single culture would be like trying to establish which single individual created swimming or fire. This is a manifestation that has nothing to do with culture so much as an unique happenstance that can happen to anyone anywhere.

There is the idea that astral projection began when the human race needed to figure out what happens after we die. It is believed the idea behind astral projection was peaked and investigated in order to promote the thinking (and hope) that we can unlatch from the physical world and turn to another – better – place where we keep living after death.

Early travelers to Asia and Africa returned to report evidence of other cultures's belief in souls leaving a body. There is some thought that, armed with this information, people imagined the ways in which consciousness can separate from the body, moving to different planes. What was critical to followers was that, in astral projection, the consciousness always finds its way back to the body, retaining aspects of being away.

Today, spiritual teachers, guides and counselors work with people who want to learn about astral projection in hopes of consciously performing the act.

The irony is that the majority of out-of-body experiences have one thing in common: projectionists were left in the most peaceful and serene state that they could have ever imagined.

To start, astral projection isn't a rare occurrence. Five to 10 percent of the world populace states having had an astral experience. That's somewhere in the vicinity of six million residents of the United Kingdom and almost 30 million people in the United States reporting an out-of-body experience.

While it is believed astral projection takes place spontaneously and under extreme duress, the truth is astral projection can be taught and practiced. There are techniques that show how to project yourself at will. But not every method works for everybody. You have to find the one that works best for you, study, practice and get good at it.

Age has nothing to do with astral projection. In fact, more children have astral experiences than adults. This is believed to be because the younger you are, the easier it is to believe. Open mindedness and faith are critical to astral projection. The biggest hindrance is cynicism.

Astral projection is actually one of the safest experiences a human being will ever have. This is true for every culture and society throughout history. Despite the stories movies have told about coming back different or bringing something back with you, no one has ever been scarred or hurt, though there is some history of people with preexisting acute psychological problems having unsafe reactions.

It can but does not necessarily take years and years of mediation and transcendental treatment to master astral projection. Like basketball or dog whispering, it's a talent. Any individual can have the talent. There are those who accomplish the transference over a few years. Others do it on the first try. The dedicated, though, have been known to have an experience after about a month.

Astral projection is not death. Many fear we may not be able to get back to our bodies. But it's more like sleep. A deep rest is a form of astral projection. We are simply not conscious of it, but as we sleep, we put ourselves in other planes to dream. We wake and often remember the experience.

Astral projection is akin to this state. Leaving one plane for a period of time and always coming back to our physical forms. Also, you are tethered to the physical world. In astral projection, they call the connection the Silver Cord, which is referenced in the Bible. The Silver Cord is only broken in death. As long as the person is alive, the invisible cord pulls you back from astral worlds.

On the other hand, like near death, reports of meeting others on the astral plane, both dead and alive, are not unusual. Variations include not being able to speak or there being no recognition of the person until you return to the physical plane. People have recounted tales of seeing a friend in the astral plane and learning later that friend was sleeping at the time.

Astral projecting has nothing to do with religion, though many religions see it as a spiritual component of life. In 1992, a study of 350 projectionists revealed that their out-of-body experiences did not alter their religious beliefs. Many reported a deeper and strengthened confirmation of their religion, but no change in their view of the world.

You can touch and feel on the astral plane, but you cannot touch anything on the physical plane during a projection.

Many astral experiences – that sensation of the spirit or consciousness leaving the physical – have taken place either under hypnosis or while sleeping. Others have stated to have astral projections while relaxing. This has made dismissing the incident as a dream easy for doubters, even when stories included facts a person couldn't have known while dreaming.

There are individuals who go in and out of the astral plane consistently. They actually talk about ways to be safe and having fun, like it's a vacation or day trip. Here are some brief tips many apply to the process, but do remember this is a practiced study.

Taking Off. One first has to learn how to induce a state of relaxation that allows the astral body to freely take off. This includes unblocking the chakras and better distributing energies.

Lucidity. Being cognizant and aware is critical to retaining information about the trip. Our physical forms can be in a deep state of relaxation or sleep, but the conscious part of us has to be thinking clearly. This is so that they can…

Recall the Experience. Many do not recall what happened during a projection. Projectionists have suggested repeating a phrase to yourself as you step into a projection stage. During the trip, repeat names of things you see and remind yourself to remember what you saw. Another noted technique for remembering is to return to the physical plane voluntarily.

Have Your Own Experiences. It is advised that despite anything you read about astral projections, do not try to duplicate any experiences you've read about. This is because every trip is different. Your experiences will be based on your perceptions, your personality and your life.

Finding the technique that works for you is critical. The one that works for the majority may not be the one for you. There are practices that lean toward the rational, the creative and the emotional. Others focus on breathing and relaxation. Some require deep sleep or meditation.

A technique should be carefully studied and understood before attempting. It should be tried no less than 15 times over 30 days, applied on different days and no more than three times in 24 hours. Until you are practiced, perform the routine when you are most likely to be relaxed, such as days when you haven't worked hard or been aggravated by family and you can focus.

The biggest part of astral projection is about being able to put material things and life's irritations aside. The studied projectionist has learned how to put themselves in a mindset that allows a clearing of the mind. This is almost impossible for the layman, especially in a world where we can't go three minutes without looking at our phones or a television screen.

A Few Last Words from Science

Though they have been trying for decades, science has not been able to properly measure astral projection. This is generally because there is no technology for monitoring the exit and return of a spirit or consciousness.

Much of the science and medical communities have dismissed the experiences as dream or fantasy, which is easy to do as most recorded incidences happen when a person is in a state of unconsciousness. Still, even the skeptical knows astral projection is something they may never understand.