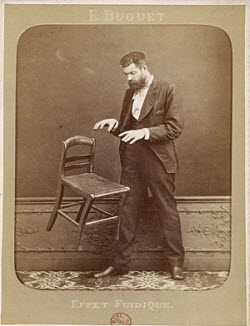 You've probably heard of telekinesis before, as it is a phenomenon that has been fictionally portrayed in many forms of media. Telekinesis refers to the ability of a person to move objects and matter without physical means. It's thought that a form of energy can be manipulated by the telekinetic user; be it a spiritual plane or some other force that ordinary people cannot see, feel or control. One of the most famous fictional depictions of telekinesis occurred in the 1987 thriller, “Carrie”.

In the film, Carrie is a teenage outcast at her high school, perpetually mocked and abused by her fellow classmates for being socially awkward. Though her teacher appears to have her best interest at heart, she eventually grows weary of the torment and pain caused by her peers and even her own mother. After falling prey to a gruesome prank orchestrated by other students, she lashes out with her telekinetic powers, setting the school building on fire and trapping most of the guests inside.

What's interesting about the film is that Carrie never has direct control over her ability. The telekinesis is in tandem with her mood, and when she was particularly stressed, the material world around her would move or alter its form. Carrie was not able to manipulate objects by her own volition until she was extremely enraged, and then she was in a trance-like state.

Some people assume that if telekinesis exists, it should be exceedingly easy to prove. However, if people had the latent psychic ability without the means to control it like Carrie, it's possible that individuals could have it without being able to show it to someone else, or perhaps even ever being aware of it themselves.

In 1846, a young girl named Angelica Cottin is said to have caused furniture to move spontaneously, as if via poltergeist. Friends witnessed the phenomenon and said that it was a common occurrence in the presence of the girl. Like the fictional character, Carrie, Angelica was unable to control her bursts of psychic ability, but some individuals have made great claims that they do have control and were studied accordingly.

There have been reports of telekinesis since the mid 1800s, and the actual term “telekinesis” was coined by Alexander N. Aksakof in 1890. Parapsychologists have studied people allegedly gifted with paranormal abilities, and many have claimed to witness impressive acts in a controlled, laboratory environment. Though notable scientists like Dean Radin, and the acclaimed author Michael Crichton have made extensive proclamations about their experiences with telekinesis, many people are still wary of its validity.

Nina Kulagina is one of the most famed conductors of paranormal ability. Born in Soviet Russia in 1926, she was studied for decades by scientists and created several black and white films demonstrating her ability to move objects, seemingly, without any physical assistance. Despite many witness reports and documentation, the reality of her claims are still considered unverified.

It's speculated that her videos could be a facade, employing sophisticated “slight of hand” tricks. Uri Geller is another psychic famous for bending spoons, but he's been caught using similar trickery in his demonstrations. Therefore, it's quite typical for people to be skeptical. Telekinesis is among many psychic abilities that is under extreme scrutiny, and many people doubt the existence of it entirely.

However, considering the volatile, ambiguous nature of telekinesis and other psychokinetic abilities, it's impossible to completely dismiss it altogether. Lab tests have shown individuals manipulating material on a small scale, and there are numerous texts that offer a comprehensive look at compelling theories that attempt to cement telekinesis within the realm of scientific rationale.

Regardless of the presence of telekinesis in the real world, it's a phenomenon that will continue to appear in the fictional universe of cinema, text and video games. Telekinesis will forever be a form of escapism; a super power that awes and inspires generations to come.