What Exactly Is Synesthesia? 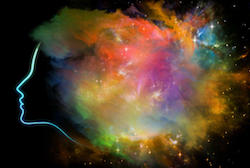 Imagine being able to taste colors or smell music. It is not a widely heard of capability, but it happens. It is possible due to a rare condition called synesthesia: a rare blending of the five senses, where one or more respond to a stimulus by perceiving it in a way that detours from what the stimulus actually is.

This blending occurs when one stimulus produces a reaction in two or more modalities, namely, noise, sight, smell, sound or touch. To better explain it, just think of the words “taste the rainbow.” To most of us, this is a metaphor. To a very small fragment of the population, however, tasting the rainbow is part of their sensory perception reality: They can actually taste colors, smell music, and transcend their five senses in ways that the majority of people simply cannot.

Synesthesia is a brain-based, non-psychological ailment that affects perception and its effects on sensation. It is basically the involuntary stimulation of a perception over something that has nothing to do with the stimulus. For example: when seeing a color, which is a visual stimulus, causes something other than a visual reaction, such as taste or smell.

When we see things, we inevitably create meanings or feel emotions toward them. A synesthete, however, will experience something different. Rather than the usual stimulus-reaction connection to what is right in front of them, the synesthete will have a physical reaction that could include his or her glands activating and causing a physical reaction. Imagine seeing the color green, and salivating over it. To the typical person, there would be no connection between the color and the response. To synesthetes, however, this scenario is quite different.

This being said, synesthesia has less to do with association–a psychological response to emotion–and more to do with an actual biochemical response from the stimulus-reaction chain in the neurons.

Synesthesia is not a psychological disorder

Synesthesia is considered neither a mental disorder, nor a trauma, neurosis, nor personality syndrome. It does not even categorize as a dissociative disorder of the mind. This entails that actual body responses, and not emotional triggers, are responsible for the unusual sensory stimulation.

More interestingly still is the fact that those people who experience the dual modal responses caused by synesthesia make connections that are consistent; they associate the same sensory connections with the same stimuli. This means that, when participants are tested on what they associate to taste, or smell, or sight, their answers are usually the same. This rules out any potential subjectivity in their reactions.

People who experience synesthesia are referred to as “synesthetes.”

In some big sample groups, as little as one person out of 20,000 has been identified as a synesthete. In other studies, there have been cases where 1 out of only 200 participants was identified. It is not easy to find and properly diagnose a synesthete.

Studies in neuroimaging suggest that synesthetes have brains areas where there are conglomerates of neurons that are closer together than those seen in nonsynesthetic individuals, who tend to show larger synapses, or gaps, among brain cells.

Other studies claim that these conglomerates, or groups of neurons, occur in separate “cliques” across the brain area, and that this dichotomy is what causes the simultaneous sensory dual reactions as well.

How does synesthesia affect the brain?

To use familiar terms to explain, synesthesia would be caused by cross -mapping in brain cells. It would be a case of cross wiring, or swapping of stimulus.

Special study groups, such as the ones from Vanderbilt and Johns Hopkins University, normally examine synesthetes. These studies are non-invasive, which means that the experts conducting the study will not engage in any physical contact with the participant. Furthermore , a second battery may be administered, along with other psychological testing, to determine synesthesia.

Synesthesia is real, but there is still work to be done

While major universities, such the highly regarded Johns Hopkins and Vanderbilt, continue to study this rare condition, there are still gaps that need to be filled.

For example, no neurologist or psychologist can ascertain how the core mechanism of association occurs at the brain cell level. Therefore, it is not yet clear how synesthetes automatically associate colors to letters in such a universal and uniform way.

There are also questions about the thinking processes of synesthetes that associate colors to numbers, rather than with letters. Regardless of which symbol they are most likely to select, the most widely accepted hypothesis is that these individuals have neuron conglomerates in the visual cortex part of the brain. This may explain why synesthetes make such quick connections between colors and symbols, in general.

As such, other parts of the brain where other senses manifest, such as taste and smell, must also have neuron conglomerates that respond to stimulus by activating these particular brain cells, causing them to alert the body to react to the stimulus. These, however, are just assumptions based on scientific findings that are not final.

How do you get diagnosed with synesthesia?

There are different ways to screen people for symptoms of this condition. The initial complaint should state that the patient is experiencing dissociative reactions to things that they hear, see, touch, feel, or taste.

The synesthesia battery is a self- scoring questionnaire that people can take independently to get instant results. These tests can be taken online, and they are great to bring to an initial consultation with a primary care provider. The physician will look at the results, and may include them as part of the patient’s chart for further referral.

Synesthesia is interesting enough on its own. Yet, there are still even more curious facts that are very salient about this enigmatic condition.

Depending on the individual, there are several possible combinations of stimulus and response that vary among synesthetes.

Grapheme-Color Synesthesia: This type of synesthesia entails associating individual letters to specific colors. In this type synesthesia, research participants have reported different associations. However, there is a consistency in the way that they see the letter ‘A,’ which is often associated to the color red.

Sound-to-Color Synesthesia: This association occurs when sound works as the primary stimulus. When the synesthete hears the sound, he or she will immediately visualize colors, shapes, and other perceived elements from other senses, including smell or taste. Keep in mind that the stimulus does not need to affect all the senses.

Sound is so prevalent that it would be rare for every sound to trigger a reaction. Therefore, the typical synesthete will react to specific sounds only.

Number-form synesthesia: Number-Form Synesthesia happens when the synesthete creates a mental map of numbers, then thinks of one number, and immediately triggers a visual of a number map. It is as if the synesthete could conjure up a timetable, a number line, or even a calendar just by looking at the shape of a number. The theory is that number forms are produced in regions of the brain involved on number sense and spatial intelligence. This area is known as the parietal lobe.

Lexical-Gustatory Synesthesia: Like the name implies, this type of synesthesia involves the association of a word to a flavor or taste. Granted, these tastes and flavors are extracted from personal memory. This means that the synesthte will not be “creating” a new flavor, nor conjuring up something that he had never tasted before.

In recent years, research has tapped into a never-seen variation in which human traits are awarded to objects. A synesthete may feel and visualize personality traits in objects such as a chair, a ball, or closet. It is not that they think that these objects are alive. Instead, the synesthetes feel a sudden awakening of curiosity and wonder as to how they are able to perceive an object under those circumstances.

Synesthesia is a real condition with a history that originates as far back as the 19th century, when it gained its most popularity. Given the complexity of the human brain, neurologists cannot quite point out the exact process by which humans associate objects to emotions, or to other sensory images that have nothing to do with the primary stimulus.

Meanwhile, since has made it possible to study this condition using empirical research and the quantitative analysis of general responses. Although the condition is rare, and presumably hereditary, it is has opened the doors to further studies on how the human brain is able to understand, comprise, engage and produce this interesting and unique capacity for human perception.