Who Is Psychic Tia Belle? 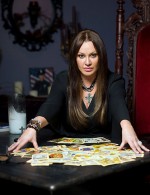 Tia Belle, a.k.a. Psychic Tia, is a new reality star on A&E. After appearing on “The Real Housewives of New Jersey,” Tia Belle is scheduled to have her new show, Psychic Tia, debut on August 3. The path that led Tia to this point is a winding one, with a story and a sequence tailor made for reality television.

You can watch episodes of Psychic Tia on Amazon and iTunes.

Tia is currently 50 years old, but began to understand that she was different than other girls around age 3. Like Haley Joel Osment in “The Sixth Sense,” she began to receive visitations from deceased people. According to Tia, she spent a great deal of her early childhood trying to figure out why she was chosen.

In spite of spending the majority of her life keeping her talents a secret, Psychic Tia learned the tools of her craft with her family and closest friends. By the age of 11, Tia was supplying her loved ones with tarot card readings and was introduced to Wicca around that time. She still uses Wiccan techniques in her work today.

When asked to describe her work, Tia often refers to the visitations she calls upon as “charades with the dead.” Reportedly, she is able to see the physical form of the deceased person, and will also feel what they died from 9 times out of 10. This could be a trauma, injury or heart attack where Tia will feel similar physical symptoms. The dead can also speak directly to Tia, and often show her images that Tia must interpret. She uses the example of a birthday cake to illustrate how the deceased person will let her know that someone in the room is having a birthday. In that sense, it resembles a supernatural version of Charades.

Prior to her work as a psychic, Tia was a member of the police force. Her career in law enforcement took a turn when she was stricken with a life threatening illness. Tia reports that she could feel her body shutting down, but was not yet ready to leave her son without support. When she was given another chance at life, her newly focused priorities took her away from the force and into the business of being a psychic medium.

Unfortunately, Tia has never been in a situation to use her powers to help solve a crime. However, she remains close with many of her friends from that career, and is completely open to offering her assistance, should they feel a need to ask.

It wasn't Tia's unique abilities that gave her the opportunity to develop her new show. Rather, it was her proximity to the ladies from “The Real Housewives of New Jersey” that supplied her with her big chance. As Tia relates it, her reputation for providing psychic services in the area led Jacqueline Laurita to come in to Tia's shop, The Craft, for a reading. After the success of that reading, the whole cast began coming to see Tia for guidance and support.

Soon after this began, Tia received a phone call from the producers of the show, asking if she would like to appear. She was, of course, completely up to the challenge, and filmed a segment for the show shortly thereafter. Due to the success of the segment and the fact that the cameras appear to have no impact on her ability to utilize her gift, Psychic Tia was developed and went into production.

While the cameras presented a new experience for her, Tia has had no issues in adapting to the new setting for her work. In fact, when she enters her trance-like state, she forgets they are there. According to Tia, the cameras pose no interruption to her normal routine, and she is able to perform her work exactly as if the cameras were not present.

Starting on August 3 at 10 pm, Psychic Tia begins its run. What can viewers expect from Psychic Tia? For starters, the show spends a lot of time filming at Tia's shop, “The Craft.” That's the location where Tia did her readings for the Real Housewives of New Jersey cast, and where she meets with customers today.

However, Tia is not your typical psychic, if there is such a thing. She is a Jersey girl through and through, which comes through in her no-nonsense approach to dispensing her information and advice. Viewers can expect to hear direct, sometimes even blunt advice given to patrons of the shop. It's clear, though, that Tia has a heart of gold and simply wants to help people along their path.

Viewers can also expect to meet Ken, Tia's husband, and Ricky, her 28 year old son. Ken tells stories of life with a psychic, such as the time Tia began asking about Marquis Cooper. For those who do not know, Marquis Cooper was one of the four football players reported missing when their boat capsized off of the Gulf of Mexico. It must be mind-blowing to live with a psychic, so Ken's stories are certainly an interesting perspective for viewers to experience.

Viewers can also expect to see a lot of Hailey, the other employee at The Craft. This former Miss North Carolina came to the city to find fame and fortune. However, she probably did not expect to find it like this! Hailey appreciates the adventure and excitement of working for Tia, since it “keeps her on her toes.”

Basically, the show will follow Tia as she moves through days in the life of a mom, friend, wife and psychic. The self-professed “Mama Bear” always seems to want to help and protect her friends and customers, though doing so can sometimes be quite a ride! From telling people's fortunes to performing charms and incantations, the show follows Tia as she puts her gift to good use.

What Makes Tia Different Than Other Psychics?

Unlike other people with the gift, Tia is capable of doing psychic readings and of acting as a medium. Therefore, her life and the show that captures it, will not be a long line of tarot readings. Since there are all different levels of psychic ability, Tia's exceptional gift allows for her work, and her show, to be more diverse than others. However, she makes it clear that she feels that other psychics, such as Long Island Medium, definitely have the gift as well.

There's also the distinguishing factor that Tia is surprisingly accurate in her work. For skeptics, they need only ask the show's producer, Matt Anderson. When production began on the show, Anderson was skeptical. Then, during filming, his mother died. Tia began to hear messages from Anderson's mother, and shared them with her producer. Eventually, Anderson changed his tune. He now believes that Tia's story is akin to the perfect backstory for a superhero.

Psychic Tia airs on A&E August 3, at 10 pm. Tune in to see a fascinating blend of real world wisdom, combined with elements of the supernatural and psychic intuition. Witness how a Jersey girl handles being able to have friends, love her family, help people and speak with the dead, all in a days's work.