What Is A Pet Psychic? 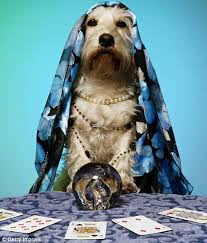 Have you ever wondered what your pet is thinking? Have you ever wished you could read their mind or effectively communicate with them? Or, have you ever wondered if there is anyone else in the world who can do those things? If so, you are sure to be fascinated by the work of pet psychics, one of the most controversial and bizarre occupations in the field of animal care and therapy.

The Work Of Pet Psychics

Pet Psychics are also commonly known as pet whisperers, such as dog whisperers, cat whisperers or even horse whisperers. You may also hear them called, simply, pet communicators. No matter what a pet psychic prefers to be called, he or she claims to be able to psychically communicate with pets. This kind of communication involves that which is imperceptible by the five basic senses. Pet psychics do not all claim to have the same abilities, however. Many believe they can explain animals' erratic behavior or complicated health problems, while others go so far as to say they can channel the spirits of dead pets. Essentially, most pet psychics believe that if you have an otherwise unanswerable question about your pet's spirit or well-being, they are the people you should call.

The “Science” Behind Pet Psychics

There is no general consensus among pet psychics on how their methods work, or from where their special abilities supposedly come. Most psychics generally agree that the ability to communicate with animals comes from their increased sensitivity to a different kind of energy; this energy is not perceivable by most people but can convey information just as speaking aloud can. Many pet psychics say they can communicate with animals either in the room or very far away, because this energy connects all living beings.

The “science” of pet psychics is far too complicated to explain in this short article. However, it is most important to state that there is no scientific consensus on the subject. While psychics have never been able to prove their abilities, they have not been conclusively disproved either.

Famous Pet Psychics In The Media

A basic web engine search yields countless examples of pet psychics offering their services, but some pet psychics have achieved more fame than others. It is also important to note that many individuals who claim to have abilities with pets may not call themselves pet psychics because they also work extensively with humans. Two popular television shows feature psychics specifically for pets: Animal Planet's “The Pet Psychic”, hosted by Sonya Fitzpatrick, and National Geographic's “Dog Whisperer,” hosted by Cesar Millan. Both these shows achieved some success, but only “Dog Whisperer” is currently on the air.

Other notable psychics who have worked with or written about pets include Sylvia Browne and John Edward, both prolific authors who have made frequent appearances on television and on the radio. Both these people have come up against both significant criticism and significant support; of course, this seems to be the case for most people who work as pet psychics.

The best place to look for information depends on why you are interested in pet psychics. If you have a pet and would like to experience a pet psychic's work for yourself, you can easily find someone through internet searches or even your local phone book. If you are more interested in the history or purported scientific basis of this field, many authors have written detailed explanations of the subject. And of course, it never hurts to check out the aforementioned television shows, especially if you are wondering whether or not you believe.