What is a Horoscope? 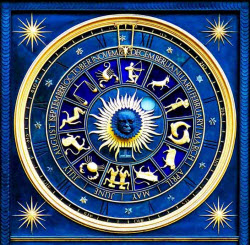 For some, a horoscope is simply a fun and interesting section in newspapers and magazines that provide some insight into the future, or at the very least what will happen to a person during that week or that very day. But, there is much more to a horoscope than that. Horoscopes are based upon astrology, which has been around for centuries. The word horoscope is derived from Greek works and translates to “a look at the hours”. Most people refer to the predictions in newspapers as horoscopes, but horoscopes has a much broader meaning.

A horoscope is a chart or diagram representing the positions of the sun, moon, planets, and other astrological aspects. Using these different factors, astrologers and psychics then compile information about events based on the sensitive angles between these different astrological aspects. When an individual is born, the positions of these celestial bodies are recorded and the map is then referred to as a natal chart, or birth chart. Once the natal chart is created, the position of the sun, moon and planets are frozen in place. A person's lot in life is assigned to them based on the position of these stars.

In popular culture, the time of birth is frequently used as the starting point for horoscopes, as is the case with the zodiac signs, but a horoscope can be created about any event in time and are frequently used as a method of divination for a number of different events, not just births. However, it is important to note that not all angles are interpreted the same. Different astrologers and psychics will employ different methods of interpretation and place emphasis on different relationships.

Depending on the astrologer or psychic, a horoscope may reveal a person's future or it may simply represent the energies that exist in that person's life. Some astrologers believe that the alignment and angles of the celestial bodies simply influence a person's decisions, but that the decisions and future of that person are ultimately left in their hands. Therefore, the certainty of a horoscope will vary depending on the beliefs of the individual creating it and the one receiving it. Many who are interested in obtaining their horoscopes do so in order to understand their personality and demeanor and to understand why they do the things they do, not to know or understand the future.

Horoscopes can also be made about other individuals, which many believe provide a key to understanding that person better. It was often times illegal to look at the natal chart of royalty during medieval times because it was considered treason. This illustrates the weight that was once put upon these birth charts and how significant they believed the positions of the celestial bodies were to understanding a person.

While there is no scientific evidence supporting the creation of horoscopes based on the positions of the planets and sun, that hasn't prevented millions of people and countless cultures from relying on the celestial bodies to help enlighten them about the future. The Zodiac is a popular example of one type of horoscope. When looking through newspapers or surfing online, daily horoscopes refer to a person's constellation. This star sign is assigned to them using the conventional zodiac, which refers to the sun's placement during a specific period of time, in this case their birth. Although the Zodiac is only one example of a horoscope, it is by far the most popular and well known form. The Zodiac refers to an imaginary belt that represents the sun's path and is divided into 12 different sections that are represented by 12 different constellations. Different times of the year are then represented by a constellation, which is then assigned to individuals who are born during that particular period. Those that believe in the accuracy of the Zodiac believe that people born under a certain sign will display certain personality traits.

Regardless of the type of horoscope, whether a natal chart or a zodiac chart, a horoscope provides individuals with another way to try and understand the world and their place in it. Skeptics and believers alike find themselves intrigued by the idea of a horoscope. Although reading one's horoscope in a newspaper offers a few brief moments of entertainment, it is impossible to truly experience a horoscope until it is given by an actual psychic or a trained astrologer.