The History Of Tarot Cards 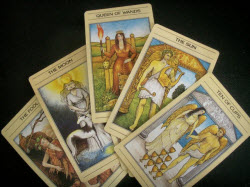 In 1440, an order was placed by the Duke of Milan. He requested several decks of triumph cards for an event. With the Duke's unique description of the cards, several experts have theorized that triumph cards were most likely the origination of a tarot deck.

The first tarot cards were used as a game with four suits that numbered one through ten. Additionally, court cards were a part of the initial tarot deck with a king, queen, page and knight. However, the deck also included 22 picture cards that were symbolic and not incorporated into the suits.

The game was titled triumph and had similarities to bridge. When playing the game, players would use the picture cards to trump other players. It quickly became popular and expanded across Europe. The triumph game became known as tarocchi, which is an Italian way to say the French term tarot. The name can be traced back to around 1530.

It was over 250 years later that occult followers first used tarot cards. In France and England, the symbolic pictures gained meaning beyond their initial trump use during a game. Believers in the occult put the cards to use for prophesy. Later, occult authors released writings about the âthe Tarot, which brought the form of fortune telling permanently into the occult.

Other historians have theorized that the cards began in Egypt and are the only remaining manuscript from an enormous fire that destroyed immense libraries in ancient Egypt. Therefore, believers of this philosophy imagine the cards are a guide to life.

Rumors persist that Franceâs Charles VI commissioned the first actual tarot deck for his personal entertainment. In fact, history buffs may view an ancient deck at the Biblioteque Nationale de France. Several experts have discredited the Charles VI story as the old deck of tarot cards seems to be from an Italian designer. Furthermore, the deck has been traced to the 15th century as opposed to the 14th.

Tarot decks include 78 cards with 22 of them considered major arcana, which is the Latin term for big secret. The remaining 56 cards are minor arcana. The major arcana cards symbolize significant life events during each personâs life journey.

The major cards are the heart of a tarot deck while the minor cards are made up of four suites, which are swords, wands, coins and cups. There are fourteen cards in each suite. For example, a set will begin with the ace and end at ten. Each suite also has a page, knight, king and queen. Therefore, the minor section of the arcana closely resembles a regular deck of cards. The page is the only unique feature.

Historians have speculated that the Joker from a typical 52 card deck was there to represent the major arcana from a tarot deck. The arcana section has a Fools card, which is similar to the joker.

During the Middle Ages, religious leaders condemned the use of cards in every form as their influence often held negative consequences such as financial losses due to gambling. Prior to the religious stance regarding playing cards, occultists often read cards for clients in secret due to the strength of religion at the time. Therefore, the connection between prophesy and cards did not begin with tarot since this occurrence was prior to its creation.

Numerous Italian Renaissance writers and poets were motivated by the tarot as writings during the time would often narrate a personâs life and events. The early Italian writing may have motivated the French occultist Jean-Baptiste Alliette, who wrote under the pseudonym Etteilla, when he designed the first tarot deck that was meant for use in prophesy. His deck became available during the late 1700s.

Alliette released a personal text as a response to a religious leader named Antoine Court, who insisted that tarot came from the Egyptian book of knowledge. Court didn't have proof to verify his claim. However, Alliette responded with his own book that explained tarot to be a form of entertainment and life narration.

When interested individuals choose to have their cards read, it is important to remember that each reading is specialized to the psychic giving the reading. Therefore, answers to life questions are often subjective. You can generally find a tarot card reader offering free 10 minute psychic readings locally. It is always best practice to first ask the psychic reader if they are proficient with tarot cards. This will ensure your basic expectation for the reading is understood up front.