History of the Ouija Board 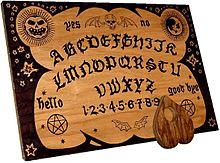 A Ouija board is a kind of talking board that is manufactured by the Hasbro company. Its design features a dual arch of all of the letters of the alphabet, under which the digits 0 through 9 are displayed.

All models also have the words “yes” and “no” printed on them, and some feature “hello” and “goodbye” as well. Ouija boards are most effective when used by groups of more than two people.

The board supposedly reveals secret messages when all of the people in the group place their fingertips on a small plastic or wooden pointer called a planchette.

Current versions of the game include plastic pointed planchettes with circular magnifying windows in them. The letters, numbers and words on the boards are enlarged by the windows, not pointed to with the sharp end of the pointer. Ouija is a trademarked name that has come to refer to all talking boards, but the boards have a history that extends well beyond their visibility as Hasbro products.

Planchette writing, the concept behind talking boards, originated in China nearly 1,000 years ago. People believed that if they held pens while in trance-like states, they would awake to find that they had written messages without their knowledge.

Spirits were speaking through them, they thought, and the words they had written were messages from deceased loved ones or other beings in alternative realms. The broader notion of spirits communicating through living people was also explored in ancient Greece and Rome.

The Ouija board as it is known today arrived on the market in 1890. The men behind it, Elijah Bond and Charles Kennard, designed the board as an extension of the planchette, which was the original focus of their enterprise.

This original version of a mass marketed talking board did not have any religious or spiritual associations. It was intended to be used purely as a novelty item. William Fuld, who worked for Kennard, coined the term “Ouija” when he took over the operation in 1901.

At first, he insisted that the word was given to him by his own planchette and that it meant “good luck” in ancient Egyptian. Later, he would change his story to claim that “Ouija” is a combination of the French and German words for “yes.” Whatever the true origins of the word might be, it has come to be synonymous with all talking boards, whether or not they are manufactured by Hasbro.

The Ouija board gained its current supernatural cache during World War I when Pearl Curran claimed to use one to communicate with the spirit of an English woman named Patience Worth who had been dead for over 200 years.

The truth is that Worth probably never existed, but the public became fascinated by the story because Curran seemed so convinced herself. She wrote several acclaimed novels, all of which were also credited to Worth as a co-writer. There are some glaring inconsistencies in Curran's story, even when skepticism of the paranormal is set aside.

Patience Worth was said to have died in 17th century England, yet Curran credited her for helping to write novels about Victorian-era America. At around the same time, poems attributed to Patience Worth were being published and earning great praise in several literary journals. Curran was uneducated, so it is doubtful that she wrote any of these works on her own and came up with the Patience Worth gimmick to gain publicity, which would be the most obvious explanation; despite the dubious tale of writing novels with a ghost via a talking board, Curran's novels were still regarded as being quite good. The Sorry Tale in particular was deemed a classic at the time of its publication.

Some of Curran's historical novels contained language that was no longer in use during World War I but was accurate for the time Patience Worth would have lived. This information was revealed by Casper Yost, who also made Pearl Curran and Patience Worth famous.

Logic dictates that Yost, himself a successful writer, was likely responsible for most, if not all, of the Patience Worth writings. Despite this probable explanation, Patience Worth remains a popular entity among people who are interested in the occult. For a time after Curran's death, other people claimed to have received communications from Worth.

The novels and poetry bearing Worth's byline fell quickly out of favor, despite the aesthetic and narrative value the works were thought to possess. Academics and anthologists were understandably wary of acknowledging publications with such ambiguous origins, no matter how good they were.

Talking boards went from being fun parlor games to being imbued with supposed mystical powers when Curran's story became well-known. Ever since then, the appeal of Ouija boards has been the fun of believing that the planchette is moved around the board by spirits or unknown entities.

Cynics often say that the planchette is moved by one or more players who are deliberately spelling out the words that they want to see. While it is true that some people do that, people who make sincere efforts to play the game seriously are seeing messages due to the ideomotor effect. The words are spelled out by players' movements, but completely unconsciously. The people who are seeing the messages genuinely believe that they have not moved the planchette.

The ideomotor effect is most commonly seen in action when someone cries. Crying is an automatic physical manifestation of an emotional response to an external situation. The phenomenon can also be easily replicated in casual settings.

Someone who has been thinking intently about performing a manual task will typically experience a small spasm or jerking in his hands. The task is not performed, but the muscles still receive the message. Psychics and hypnotists use their knowledge of the ideomotor effect to correctly predict what their subjects are thinking.

Someone who is receiving a psychic reading will make small, involuntary movements during a session that will indicate which of the psychic's statements hold meaning for her. Even a cynic can betray her emotions in this manner, since efforts to reveal nothing through speech or facial expressions can make other physical movements more pronounced.

The effect is even more marked when pre-suggestion, such as letters on a board, is present. People who already know what messages they want to see push their planchettes inadvertently.

The Ouija board is a fascinating amalgamation of mystical folklore and psychological theory, especially when one remembers that it is a board game sold by Hasbro. While it is unlikely that Ouija boards are vessels to some realm beyond normal sight and sound, they remain popular among casual players and serious academics alike.