The History of the Crystal Ball 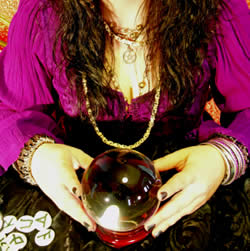 We have probably all seen a crystal ball at one time or another and know they are associated with psychics. Psychics use crystal balls to foresee or foretell future events or to discover hidden knowledge, usually by the interpretation of omens or through the aid of supernatural powers. In other words, crystal balls are used as an aid to clairvoyance. But how did it all start?

Celtic druids are thought to be the first to have used crystals for the purpose of divination. Later, people — such as fortunetellers, wizards, seers, gypsies and psychics — began using crystals to see the future during medieval times in Europe. Early crystal balls were sometimes made from beryllium aluminum silicate because it was transparent, but they were later made out of rock crystal. Christians of the 5th century thought that evil spirits and witches inhabited crystal balls and that any message divined from them came from the devil. However, by the 17th century, German priests would often put a crystal ball on the altar during prayers.

The act of “seeing” things — past, present or future — is called “scrying.” When scrying is done through the use of crystals, a crystal ball or another transparent medium, it is called “crystal gazing” or “crystallomancy.” Some psychics claim to see images in the crystal ball, while others believe that the transparent quality of the gemstone helps them clear their minds sufficiently so that information about the future becomes apparent to them. This information may then be used to make important decisions concerning finances, love, business, travel and relationships.

Throughout history, children were often used as intermediaries in scrying. It was believe that they were pure of spirit and more open to communication from other worlds. Children were also considered less likely to try and defraud people.

Though crystal balls are now used by psychics and entertainers, they were used at one time by a scientist named Dr. John Dee, who lived in England in the 1500s. As a consultant to Queen Elizabeth I — as well as a geographer, mathematician, astrologer and astronomer — he used crystal balls in his work involving divination, Hermetic philosophy and alchemy. However, by 1824, a law was passed in England making divination illegal, punishable with three months of hard labor. A quartz ball that once belonged to Dee now resides in the British Museum.

Scrying devices, such as mirrors, have been mentioned in literature for hundreds of years, including Geoffrey Chaucer's “The Canterbury Tales” and Shakespeare's “Macbeth” and “Measure for Measure.” Roger Bacon, who wrote in the 13th century, mentioned crystal balls in several of his stories, allowing characters to see what was happening in faraway places. In more recent times, J.R.R. Tolkien includes crystal balls called “palatirs” in “The Lord of the Rings.” These crystal balls allow the characters to see and communicate with one another from long distances.

In England during Victorian times, something called the “garden gazing ball” became popular. A version of a crystal ball, a garden gazing ball was a colored-glass globe that was supposed to reflect the beauty of the garden and produce a peaceful and calm state of mind for those who gazed into it. Perhaps just the state of mind that might allow them to “see” things they wouldn't otherwise be able to see.

Crystal balls, because they are so recognizable, are often used on stage as props by magicians or mentalists. This type of performance is called “crystal gazing” or C.G. Claude Alexander, also known as “Alexander the Crystal Seer” was one of the most famous performers who used a crystal ball for this type of act.

Crystals have been used by many different cultures throughout history for the purpose of healing. The basis for crystal therapy is the belief that a crystal gives off vibrations that affect the flow of energy surrounding it, which can help resolve issues with the body or its aura. Though people of the past believed that crystal balls were inhabited by spiritual beings, it is now more commonly believed that the vibrations of the crystals interact with the electromagnetic field that surrounds our bodies, perhaps helping us to heal or perhaps helping us to “see.”