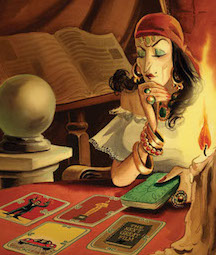 While celebrities have the funds to see therapists, financial advisors and managers for all their woes, they often seek the help of spiritual advisors, whether that's a medium to communicate with a loved one or a psychic to help them choose a path.

While for some, seeking the help of a spiritual advisor might be a serious undertaking, for others it's a hot trend when you're living in Hollywood.

Ron Bard is a psychic that often meets with Brad Pitt to discuss difficult decisions in his life. Bard says that Pitt first came to visit him while filming Mr. and Mrs. Smith. That was around the time Pitt might have been in the middle of a hard decision regarding his marriage to his first wife, Jennifer Aniston. Bard has said that Brad Pitt is a very spiritual person, and it's no wonder he seeks the advice of someone before hard choices since he's very much in the public eye. It's potentially a load of pressure.

To keep in contact with her deceased mother, Jolie has been known to see a psychic medium. She has declared publicly how deeply she felt the loss of her mother, so it might be no surprise she would keep in contact through a psychic. She could be seeking motherly advice on child-rearing for the six children that she has with Brad Pitt.

Strangely, Clooney saw a medium once to communicate with his best friend after the friend's death. That best friend was his pot-belly pig, which had been with him for 18 years and would often sleep in his bed. He was told that his friend, Max, was happy and still visited Clooney.

Another actress who misses the person who brought her into the world, Denise Richards will often see a psychic to communicate with her mother. Denise has talked about her need to feel close to her mom after she died. Before her passing, Richards' mother received a reading from a medium about family waiting for her on the other side. Richards says that the woman named Natalie knew the exact names of deceased family members without any prompting.When Richards heard about this medium, she told her mother to keep in contact through Natalie if something were to ever happen.

The beautiful actress has been known to consult with a psychic for relationship advice predictions. Back in 2008, she was often seen frequenting a single psychic in West Hollywood. At the time, she had been dating a string of actors with no marriage and kids in the near future. In 2015, she married the musician Benji Madden after dating for two months. She said she knew immediately that he was the one who would be her husband. Diaz might have received psychic advice on that decision, or perhaps she was told to watch for a tattooed guitarist in her near future.

Chelsea isn't shy about her relationship with psychics and mediums. She often meets with the famous medium James Van Praagh to communicate with her brother who died when she was young. After the recent passing of her mother, Chelsea has used the abilities of Van Praagh to feel close to her mom. He's done readings on her cable show before it went off the air too. It's reported that she might have consulted with the psychic medium before joining Netflix for her new comedy show.

The women from the reality television show The Real Housewives of New York have been known to consult spiritual advisors for many of their decisions. In one episode that aired in 2011, the group attended a reading together where one of the women learned that she would be married and expecting a child by the end of the year.

The reality star once had a psychic as her business manager, but that didn't last very long. After having his services for a week, it's reported that she let him go from his position. It's unclear whether she hired another advisor for the position of psychic manager or if she went with the traditional title of manager for her next employee.

It's hard to know what goes on behind the scenes of a celebrity marriage, but it shouldn't be a surprise that successful actors and actresses consult with spiritual advisors for serious matters in their lives. The star of Sex in the City, Sarah Jessica Parker, has been known to seek the services of a spiritual advisor for her marriage troubles. While it's reported that Matthew Broderick, husband to Sarah Jessica, doesn't really enjoy the process, he takes part to help with his marriage.

The late Dirty Dancing and Ghost star was known to consult a psychic for his marital troubles. He was married to his wife for 34 years and was heard crediting the spiritual advisor for bringing his marriage back on course. While it's unknown what the psychic did for this late actor and his wife, they were married for 34 years.

It might come as a surprise that someone as serious as a Former President and First Lady of the United States would use a spiritual advisor. Ronald and Nancy Reagan would often consult with an astrologer for their travel plans. The astrologer, Joan Quigley, would help them make serious decisions like who would be Reagan's running mate as vice president. After the assassination attempt in 1981, Nancy increased her meetings with Joan.

When she was a kid, Taylor's dad organized a party with a circus theme. At the party, there were psychic palm readers. In an interview for a radio station in Australia, Swift admitted that the palm reader predicted her rise to stardom. She said that everyone on the planet would “know her brand”.

The former star of 90210 visited a psychic medium in the hopes of communicating with her deceased father, Aaron Spelling. Instead of hearing from Spelling, she claims that she had a visit from Farrah Fawcett. There was apparently vital information that Fawcett wanted relayed to Ryan O'Neal. Spelling wrote O'Neal a letter detailing the information that Fawcett wanted revealed. Sometimes, the spirits have their own agendas.

Before the tragic end of her life, Princess Diana sought the advice of numerous astrologers and spiritual advisors. She wanted to know whether she would be reunited with Prince Charles after their split, and she was concerned that she was in some kind of danger after the brakes on her vehicle failed.

Tony Blair was the former British prime minister. Blair and his wife Cherie, who is a student of a New Age and alternative health advisor, have participated in spiritual undertakings like a Mayan re-birthing ceremony on one of their trips to Mexico. It's been reported by numerous tabloids that Mrs. Blair paid for her personal astrologer with funds allocated for government use.

Whether they are looking for career advice or making decisions about their love life, as can be seen above, many celebrities seek the council of astrologers and psychics when they're grappling with serious choices in their lives. In some cases, the celebrity wants to feel the love and affection of a lost family member or loved one who has passed, so they will consult with a medium.