What Are Angel Cards? How Do They Work? 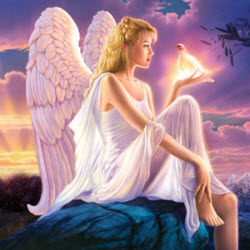 Angel cards are beautifully drawn cards with representations of angels, guardian angels, and other archetypes depicted upon them. They are most often used like tarot cards, in that they are dealt out in certain traditional arrangements and interpreted for clues as to fate and destiny.

No one is really sure what angels are, though humanity has been aware of them through its entire history. People have always known that there are undercurrents to life and entities at play that they cannot see. It is pleasing to us to attach character and volition to the unknowable. Certainly some of the odder events in all of our lives seem to have a tantalizing hint of “personality.” Sometimes all of us have felt guided by unseen forces. There are times that these forces are so tantalizingly close that we almost believe that we can touch them and perhaps influence them as profoundly as they influence us.

Although we have yet to prove it scientifically, humanity's experience is that the forces we call “angels” guide us with chance, happenstance, and random events. A good way to make contact with these forces is with guided randomness. Many cultures have used this method of divination. Whether or not divination places one in direct contact with the unseen is an interesting question. What is sure is that divination, by using carefully randomized constructs of archetype and symbol, can be depended upon to detect which way the unseen winds are blowing.

That may sound complex but the applications are simple and well known. In Asia they use the I ching, and in the West they use tarot cards. Even flipping a coin works, because the random outcome of a coin toss can be picked up and carried along by the same currents of fate that carry our lives. A more modern and reliable method of doing the same thing has been found with angel cards.

It is a mystery why the forces that affect our lives seem to have a personality but it is nonetheless true. They remind us of people we have known who have passed on, or famous mythical characters we have read about and found resonant with our own lives. The many angels of the Catholic Church and Western culture certainly fit the bill. Though the angels are not exclusive to the Catholic church and angel cards work perfectly well for people who are not Catholic, it is important to note that this is where the current concept of angels was born. “Catholic” is a word that means universal, and though times have changed, when the world of the angels and archetypes was being mapped out in Western Europe “catholic” was the word that was applied to all the churches.

Although it may seem odd to refer to the world of the angels being “mapped out” it is nonetheless true. Patterns of fate are notoriously difficult to detect or predict. It requires the work of generations. During the Middle Ages, when the angels were born, life was difficult and brief. Humans coexisted with nature on an intimate and everyday level. A person could be expected to observe the cycles of birth and death monthly, if not daily. With such a parade of life passing before their eyes it was easy for the people of the day to observe the patterns of fate and causality. Their broad familiarity with fate and chance lead them to create the archetypes known as angels and the modern world has modified them to suit our purposes.

Angel cards are shuffled face-down. Until they are dealt out and turned over, any card could be anything. Once they are face up, their identity snaps into focus. This process could be viewed as a crystallization of the microcurrents of destiny at the moment of dealing. When many cards are placed in a meaningful arrangement, a picture begins to form. The angels depicted upon the cards cast their particular personalities onto the reading, and a perceptive reader can begin to get an idea of what they mean. The various angels at play in a reading reflect the guardian angels at work in a person's life or a particular situation, and much can be learned from them.

The mistake most novices make when using angel cards is to assume that the angels are talking about the distant future. In most cases, they are not. Experienced readers know that as often as not the angels are describing what is going on in that particular moment. The future is more or less unknowable. Angels have a lot to say about what is happening right now. When the cards discuss the future, it is rarely a future than is more than a day or two away. It is much like a thermometer or a barometer. A barometer cannot tell you what the weather will be like next year. It does an excellent job of telling you what the weather will be in a few hours. That is why it is essential to check the barometer regularly.