Who Is Sylvia Browne? 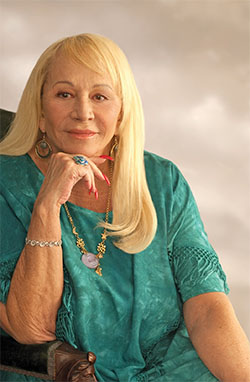 Sylvia Brown is a famous American psychic, spiritual teacher and author. She was born Sylvia Celeste Shoemaker on October 19, 1936 and spent her early years in Kansas City. Sylvia had a Jewish father and Episcopalian mother. According to her own statements in 2001, Sylvia is also Jewish.

Sylvia Brown has made numerous predictions over the years, some of which have caused controversies. She explained that she started experiencing visions when she was only 5 years old. Ada Coil, her maternal grandmother, helped her get to terms with her visions. Sylvia said her grandmother was also a psychic medium.

She started giving psychic readings in 1974. She provides both one-on-one and group readings that may be conducted via the telephone. She currently has a Web site that provides psychic content in a variety of formats, including blog posts, articles and videos.

Brown also predicted the rise in skin cancer among children up to 2010. She explained people were careless about protecting themselves in spite of the numerous UV ray products in the market.

She also predicted that an American president elected between 2008 and 2020 would succumb to heart attack and die in office. The succeeding vice president would think of declaring war on North Korea, something that would prove unpopular. As a result, the VP would be assassinated in the process of declaring war.

In 2011, Sylvia herself suffered a major heart attack while she was in Hawaii. She had told Larry King in 2003 that she would die at the age of 88 years.

Sylvia and Gary Dufresne were married in April 1959 and their marriage lasted up to 1972. She has gone through five marriages and the name Brown came from her third marriage to Kenzil Dalzell Brown.

Sylvia founded the Society of Novus Spiritus Church in Campbell, California in 1986. Novus Spiritus is a “Gnostic Christian” church, according to its own definition. The church says it follows the teachings and traditions of Jesus Christ without excluding Islam, Judaism, Hinduism or Buddhism. The church describes the Bible as a marvelous book that is a good teaching tool.

Sylvia also heads Sylvia Brown Enterprises and Sylvia Brown Corporation. By 2010, it was estimated that the businesses earned about three million dollars a year.

Sylvia has also published several books on spiritual and paranormal topics, including All Pets Go to Heaven, Astrology through a Psychic’s Eyes, Adventures of a Psychic and The Other Side and Back. Her latest book is titled Afterlives of the Rich and Famous. She explained that she wrote the book following numerous questions about what people’s celebrities were doing on the “Other Side.” Buyers can order personalized and autographed copies of the book.

The “Other Side” is Sylvia’s term for heaven. She says she knows what the other side is like and what goes on there. On The Other Side and Back describes her “experience” in heaven where the constant temperature is 25.6 degrees Celsius. She explains that people find it difficult to perceive the other side because it is at a higher vibration level. She also says she has the ability to see angels, including her spirit guide, Francine.

The “Inner Cycle” members of her Web site have access to a variety of resources, including Sylvia’s Quarterly Newsletter, member only forums, discounts on store purchases and discount show tickets.

Other things found on the Web site include readings, appearances, books, newsletters, audio and video.

Sylvia is currently engaged in her 50th anniversary tour, which is scheduled for Minnesota, Michigan and Nevada. She is scheduled to stop at a number of spots during the tour, among of which are Carlton, Saint Sault Marie and Reno.

A trance session is also scheduled on June 6 in San Jose where Sylvia is expected to feature with her spirit guide, Francine. This will come after a “Spiritual Salon” on June 2 where a small group of participants will get the opportunity to share intimate conversations with her.