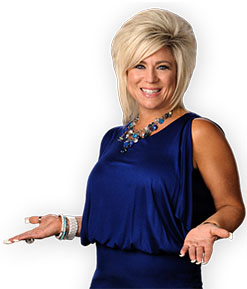 Theresa Caputo is a psychic medium and star of the TLC television show “The Long Island Medium.” Born and raised in Hicksville, New York, Caputo, along with her husband of 22 years, Larry, has two children: a daughter, Victoria, and a son, Larry. “The Long Island Medium” showcases Caputo's psychic abilities as well as her home life, with many episodes revolving around her balance between her family and her career.

Caputo claims to have begun experiencing psychic phenomenon at the young age of four. Later on, after suffering from anxiety and other psychological ailments, Caputo's mother convinced her to visit a spiritual healer named Pat Longo. Longo gave Caputo insight into her abilities, telling her she had the power to communicate with spirits. Caputo has been a practicing medium for 10 years and is a certified medium with the Forever-Family Foundation, which is an organization committed to linking science with the supernatural.

For the most part, Caputo's psychic prowess involves the ability to communicate with the deceased. The large majority of her clients are individuals seeking closure by attempting to communicate with loved ones in the afterlife. For example, many clients reach out to Caputo in order to make amends and repair strained relationships with deceased loved ones.

When asked about her reading process, Caputo claims it is hard to describe. She says that the spirit world is much different than our own and that the giving and receiving of information is done in a much different manner. However, Caputer has said that, in her younger days, she actually heard the voices of spirits as well as saw visual images of the deceased and of the afterlife in general. She went on to say that, over time, she became frightened of her powers and learned how to modify them and make contact in other ways.

Before starring in “The Long Island Medium,” Caputo relied on word of mouth to keep her medium business afloat. She says that her clients were so pleased with her abilities that her schedule was booked two years in advance even before she appeared on “The Long Island Medium.” These days, Caputo's potential clients must be put on a waiting list due to the fact that her services are booked for three years into the future.

“The Long Island Medium” on TLC

TLC's “The Long Island Medium” originally aired in September 2011. The pilot episode, which was entitled “No Turning Off,” introduced Theresa Caputo and her psychic gifts as well as her family's frustration over the medium's frequent, and often random, communication with the deceased. The episode had 1.36 million viewers, paving the way for the following eight episodes of the first season. “The Long Island Medium” quickly evolved to a favorite among viewers, with Caputo often being labeled “America's favorite psychic.” To date, TLC has aired four seasons of the show, with a total of over 50 episodes.

The show's reception is varied. Positive reviews of “The Long Island Medium” praise Caputo's warm, bubbly personality as well as the positive dynamics of her family. Likewise, the show has been called a likeable mix of “Real Housewives of New Jersey” and “Bewitched.”

Unfavorable criticism of the show is much akin to that given by Caputo's personal critics. The James Randi Educational Foundation went so far as to present both Caputo and the TLC network with a mock award called a Pigasus. The foundation labeled Caputo as a performer able to deceive a large audience with little effort, even going so far as to say that Caputo and her show were harmful to viewers and clients alike. Despite this and other negative criticism, Caputo's fans continue to grow in number and loyalty.

In May of 2013, Theresa Caputo appeared on “The Dr. Oz Show.” After performing readings for members of the audience, Caputo agreed to undergo an experiment involving brain activity. While channeling spirits of the deceased, Caputo's brain activity was recorded by specialists. After administering several types of brain scans, specialists concluded that Caputo's brain activity was, in fact, abnormal while she performed readings. For example, the medium's brain activity slowed considerably during channeling. Experts on the show reasoned that decreased brain activity during a reading may allow Caputo to better communicate with spirits, as this allowed her to “tune out” her surroundings and focus her energies on psychic readings.

In another experiment, specialists recorded Caputo's brain waves, both while in a relaxed state and while channeling. In its relaxed state, Caputo's brain showed that she has a high aptitude for meditation, which could likely help her communicate with the deceased. While performing a reading, records of the medium's brain waves show heightened activity in the temporal lobes, which have been linked by researchers to an increase in psychic ability.

Like other psychic mediums, Theresa Caputo has received her fair share of criticism. In addition to being labeled an out-and-out phony, critics have accused Caputo of using immoral methods during her psychic readings. For example, some naysayers have alleged that Caputo uses “cold reading” techniques when sitting with clients. These techniques involve a number of methods, which, combined, help the reader determine details about a particular client. Some cold readers can obtain a significant amount of information about a client by analyzing factors like body language, race, sex, age, sexual orientation, style of dress, hairstyle, speech patterns, etc.

Some critics have also labeled Caputo a charlatan and her television show exploitative. These individuals and organizations express extreme doubt over Caputo's abilities and say that she takes of advantage of, not to mention capitalizes on, clients in their vulnerable states following the deaths of loved ones. These critics also cite Caputo's clients' willingness to believe in her powers as a determining factor of her continued success.

Caputo has responded to critics in a graceful manner. She expresses the utmost respect for critics and assures the media she has nothing to prove. Caputo says she understands the skepticism regarding her gift and claims she is eager to do nothing but help her clients.

More information can be found on Caputo's website. Also, her first book will be available in October 2013. Published by Atria Books, Caputo's book will feature tales about her abilities, her thoughts on God, the afterlife and more.