Who Was Ruth Montgomery? 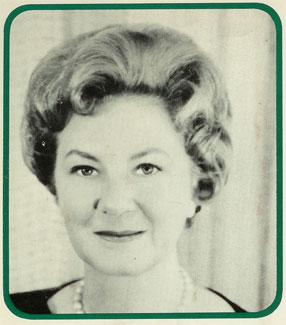 Born Ruth Shick in 1912 in Sumner, Illinois, Ruth Montgomery was an iconoclast from early on in her life. Before her career as a psychic, Montgomery was a successful journalist at at time when there were far fewer women in the field and more obstacles than there are today.

As a psychic and writer about spiritualism, she is considered one of the forerunners of the modern New Age movement.

Montgomery attended Baylor University while working at the “Waco News-Tribune” in the early 1930s and went to work at the “Louisville Herald-Post” after graduating from Purdue University in 1934.

By 1943, she was the first woman reporter in the Washington, D.C. office at the “New York Daily News,” and she was one of only a dozen reporters invited to Franklin Delano Roosevelt's funeral and the only female. She also married a man named Robert Montgomery.

Montgomery's journalism career continued to flourish, and she went on working in the industry until the late 1960s. Some of her other notable journalism accomplishments included an interview with Juan Peron when he became the president of Argentina, covering the Berlin Airlift, writing about the Cuban coup that resulted in Batista's dictatorship and being at the scene in Egypt when King Farouk fell.

She traveled throughout the Soviet Union and Poland to cover Richard Nixon's trip there when he was vice president. In all, she covered six presidents. She became the president of the Women's Press Club in 1950.

In addition to her journalism work, in the 1950s, she began writing a regular column about world events predicted by then-famous psychic Jeanne Dixon. Dixon allegedly predicted the assassination of Robert Kennedy and told President John Kennedy not to go to Dallas. Her 1965 book on Jeanne Dixon, “A Gift of Prophecy,” covered many of these predictions although Montgomery complained that much of her writing about predictions Dixon got wrong were removed by her editors.

As successful as Montgomery's journalism career had been, she found even more success in writing about her own psychic experience, psychic phenomena, reincarnation and other paranormal topics. Montgomery considered the medium Arthur Ford to be her mentor. Ford was well-known among other things for his claim that he had contacted the spirit of Harry Houdini.

She began establishing herself as a prominent psychic in her own right in the 1960s. Her first book besides the Dixon biography to deal extensively with psychic phenomena was “The Search for Truth” published in 1967. The book originated in an assignment to attend seances and write a series on it for the International News Service. In this book, Montgomery examined ESP and precognitive visions among other concepts and wrote extensively about her own experiences with automatic writing and spiritual guides.

Her 1968 book “Here and Hereafter” dealt with reincarnation and was enormously popular. Montgomery examined the phenomena of people put under hypnosis recalling past lives and also considered whether reincarnation and karmic cycles are linked. In other words, people in subsequent lives may suffer for the wrongs they did in a previous life.

Along the way, Montgomery also wrote several books that were based more in her journalistic background, some of which dealt with U.S. presidents, but by the 1970s, she was firmly established as a writer about reincarnation, aliens and psychic and paranormal phenomena.

“Companions Along the Way,” published in 1970, was written with the strong influence of her guides and automatic writing, and in it, Montgomery explored her own past lives as well as those of Arthur Ford, prominent psychic Edgar Cayce, and others.

Montgomery believed herself to be the reincarnation of a sister of Lazarus, a woman also named Ruth although she is not mentioned in the Bible. As the sister, Montgomery claimed to have witnessed the circumcision of Jesus.

In “A World Beyond,” written not long after Arthur Ford's death, Montgomery claimed to be channeling Ford and bringing a message about the nature of death and the afterlife. In fact, increasingly throughout her life, Montgomery believed that she had a purpose in life, and it was to educate people about the psychic world, the paranormal, reincarnation and other concepts.

Montgomery wrote about a spiritual healer identified only as “Mr. A” for her book “Born to Heal.” In “The World Before,” she launched an ambitious examination of the lost worlds of Atlantis and Mu along with reporting on many of Arthur Ford's predictions and looking at the past lives of many celebrities including Elizabeth Taylor, Jacqueline Kennedy Onassis, Winston Churchill and Richard Nixon.

Montgomery made a number of predictions of her own in the later decades of her life although like Jeanne Dixon's, many did not come to pass. She claimed that Ronald Reagan would be a one-term president, that World War III would begin in Ethiopia in the 1980s and that at the end of the 20th century, a Polar Shift would result in the end of much of life on earth. However, she also wrote about the end of the century as the dawn of a new age for humanity. Montgomery attributed the fact that many of her predictions were wrong to the free will of humanity.

The concept of “walk-ins” was also popularized by Montgomery. This is the idea that a soul can depart a human body, often permanently because it has finished its mission on earth but sometimes temporarily, and another soul or spirit might take its place. Montgomery predicted that the United States would have a “walk-in” president in the 1990s.

She also wrote that a number of prominent people were “walk-ins.” Her book “Strangers Among Us” dealt extensively with walk-ins and saw them as advanced spiritual guides who were supposed to lead humanity to a new and more enlightened age. “Threshold to Tomorrow” expanded on Montgomery's ideas about “walk-ins” and posited that a person could be a “walk-in” without realizing it.

The next major area of interest Montgomery turned to was alien life. She wrote several books on the topic of alien intervention in human affairs and claimed to have interacted with aliens a number of times herself. She said this particularly happened a lot when she lived in Mexico in the 1970s. At one point, she turned down the opportunity to take a ride in an alien spacecraft because her husband was unwell. In “Aliens Among Us,” she wrote that the U.S. government had been aware of extraterrestrial life for decades and that at least one U.S. president had met with an alien.

One of the last books Montgomery penned was her own autobiography. Titled “Ruth Montgomery: Herald of a New Age,” the book covered her journalism career as well as her rise and success as a psychic. In her final book, “The World to Come: The Guides' Long-Awaited Prediction for the Dawning Age,” published in 1999, Montgomery looked to the future and what humanity might face in the years ahead.

At least one of her predictions looks poised to come true as she predicted that global weather patterns would continue becoming more severe. She also predicted a shift in the axis of the earth. Finally, Montgomery wrote extensively about her own reincarnation and that of others from Biblical times and their efforts to bring messages to humanity.

After her husband's death, Montgomery said she continued to communicate with him. She died in 2001, but psychics have continued to claim communication with her as well. Some have produced quotes that they say have come from her in books published since then.

Montgomery was a founder of the Association for Past Life Research and Therapy, based in California, which is still active today. While not as popular as she was in the 1960s and 1970s, Montgomery influenced a generation who grew up to be New Age spiritual leaders themselves and is still read and remembered as important today.