Who Was Rudi Schneider? 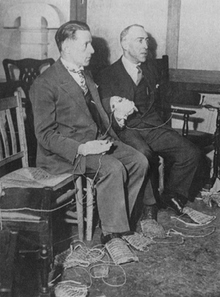 Rudi Schneider was a spiritualist and psychic medium who was born in Austria on July 27, 1908. His father was Josef Schneider and his brother was Willi Schneider. Rudi began his psychic activities at a young age. He was only 11 years old when he and his brother started displaying psychic gifts.

Rudi would later go on to be the subject of study of the Journal of the American Society of Psychical Research. His connection with the spiritual world came through a spirit that he and his brother called “Olga.” They thought that this spirit was that of Eliza Eosanna Gilbert.

Further attacks on Rudi's credibility were forthcoming. A journalist named Warren Vinton accused Rudi of relying on his family to fraudulently produce psychic movement of objects around the room. Vinton's accusations were successful in undermining Rudi's credibility. In 1927, Vinton's findings were published in the journal Psyche.

In 1928, parapsychologist Walter Franklin Prince stated that no paranormal events were observed during some demonstrations by Rudi. He wrote that nothing unusual happened except for some movements of the curtains which could be explained by factors outside of anything psychic.

The challenges to his credibility only spurred him on. In 1929, he came to the National Laboratory of Psychic Research to prove himself. Unfortunately for him, he couldn't stand up to the scrutiny that he received there.

Rudi agreed to be examined in experiments carried out by Harry Price. He wished to show everyone that his claims to being a psychic were not without foundation. Price was an investigator and debunker of the paranormal. He connected Rudi to a series of switches that would alert everyone involved if he would move his limbs. Rudi was also physically restrained for some of the experiments. The point of these tests was to see if Rudi's levitation claims had any basis to them.

Price was actually surprised by the results. He noticed certain unexplainable things that happened during the tests. At first, Price was aware of the fact that the objects around the room had moved a little, and unexplainable shapes and shadows had appeared in the room. Price took this as a sign that no definite conclusion could be made. However, Price was committed to showing that any claims to the paranormal are obviously false.

Three years after Rudi came to London, Rudi would again be accused that he was trying to avoid the control parameters of the tests. Price had a photograph that showed Rudi moving a handkerchief after freeing his hands from the restraints.

The scientists at the laboratory ultimately decided that Rudi had no special abilities. Many people in the parapsychology community disputed the veracity of the photograph. Consequently, Price wrote that he would have to be more careful about the control parameters of the studies.

Other members of the scientific community applauded Price's conclusions concerning Rudi's abilities. They wrote that they had also seen Rudi try to avoid the controls of the studies. Price ending up being congratulated for his debunking of Rudi's abilities. This was the case, despite claims from some that he had altered the photo to discredit Rudi.

A prominent member of the Society of Psychical Research, John Randall, did a review of the whole case. His conclusion was that Rudi had moved with fraudulent intent during the study.

Price also referred to research done by a French paranormal investigator named Dr. Eugene Osty. Dr. Osty had set up a camera with an infrared trigger that would record any movement by Rudi. He claimed that the camera had been triggered a number of times during his study. However, the pictures taken showed no evidence of any movement by Rudi.

Osty thereby concluded that the study showed that Rudi had powers of telekinetic movement. He claimed that something called “ectoplasm” was setting off the infrared trigger. Price noticed that Rudi was not adequately restrained during the study by looking at the photographs. The Institut Metapsychique's tests were thereby invalidated.

In the last years of his career, Rudi worked with the Society for Psychical Research as a final attempt to prove the veracity of his claims. It was noted that despite 55 demonstrations were performed, there was not a single paranormal or uncommon event that occurred. The studies conducted at that time were carefully done with adequate controls.

Since the evidence was mounting against Rudy, the head researchers Oliver Gatty and Theodore Besterman conclude that there was no evidence that indicated that Rudi had any special powers.

Since Rudi had so many claims of fraud leveled against him, it is generally taken to be the truth that he had no special powers. As a result of his unsuccessful experiences with Price, Rudy decided to quit the pursuit of claims of mediumship and decided to practice auto mechanics for the rest of his life.

After he retired, no further tests were conducted and no demonstrations took place. Rudi disappeared after 1934 from the scene, and there are no records of any other attempts to establish his credibility after that time.

Rudi's brother Willi also laid claims to having psychic powers. Warren Vinton, who investigated Rudi, also attended sittings with Willi in 1926. According to Vinton, there was some movement of the curtains in the room and a sheet of paper. Vinton claimed that Willi was blowing air out of his mouth and that this was what caused those movements.

Recently, a skeptic named the Amazing Randy has put psychics to the test. He has offered a prize of one million dollars to anyone who can demonstrate paranormal abilities under controlled conditions. So far, no one has taken his prize.

The claim of the Amazing Randy is that if there were really people who have psychic abilities, then why don't they use these abilities to attain wealth and power for themselves. While his argument seems to have some strength to it, the truth is that psychic phenomena might be more delicate and unpredictable than he would lead us to believe. The experiences of psychics may not be so reliable and may be mixed with some confusing factors.

Also, the gift of prophecy might be more rare than general psychic abilities. Prophecy is necessary to make true predictions that would allow someone to predict the future of the stock market or other economic phenomena. I guess that we have good reason to further investigate the claims of psychics, but a strong dose of skepticism is warranted.