Who Are The Psychic Twins Linda and Terry Jamison? 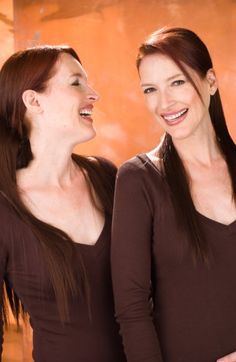 It is said that twins share a special bond; some twins even claim to have an empathic link. Terry and Linda Jamison claim a greater bond than that: They can read each other’s mind. And they could read your mind too, if you let them.

The Jamison twins are the world’s most documented psychics, and a very rare case of psychic twins. As professional psychics, they say their mission is to bring the information they find through their psychic gifts to a suffering world.

Terry and Linda Jamison were born in Westchester, Pennsylvania, the daughters of artist Philip Jamison and Jane Bethel Gray. The twins first realized they had psychic abilities when they were about three years old.

Terry says that they could predict the future, and recounts the story of winning a contest at the age of five by knowing exactly how many beans were in a jar immediately by looking at it. Linda says that she and her sister were also artistic child prodigies.

Both girls attended the Pennsylvania Academy of Fine Arts in Philadelphia before transferring to separate Universities: Terry went to Penn State while Linda attended the University of Delaware. A year later, both transferred to the Tyler School of Art at Temple University in Philadelphia, where they each received a degree in Fine Arts. Linda is said to be “the performer” of the duo, while Terry is a painter. Their father, Philip Jamison, is an acclaimed water color artist.

The twins became professional performance artists, starting a performing arts company, Pop Theatrics, which took them to Washington, D.C. to perform at the White House for Ronald and Nancy Reagan. They describe Pop Theatrics as a “magical night circus” with 20 original characters. They also fronted a band called Flying Objects. They made it to television by starring as Louise the Two-Headed Housewife on Saturday Night Live.

After their artistic successes in the 1980s, the 1990s looked bleaker for the Jamisons. With no money and no jobs, they moved to Los Angeles in 1990 and took odd jobs for awhile. Eventually, they decided to try using their psychic gifts professionally. They began doing psychic readings and offered advice and counseling to clients.

It was during this period in the late 1980s and early 1990s that the twins became Buddhists. Terry states that as Buddhists, she and her sister embrace all religions and they do not reject the concept of God. Buddhism encourages the twins to use their natural gifts to help other people.

The Jamison twins are best known for their eerily accurate prediction of the attack on the World Trade Center in 2001. Though they had predicted such an attack would occur in 2002, they made their prediction on the Art Bell radio program “Coast to Coast AM” on November 2, 1999, specifically naming the World Trade Center. The actual attack occurred less than four months prior to the beginning of 2002. They also predicted the stock market crash of 2000 on the same radio show.

According to their website, the Jamison’s other accurate predictions include the Boston Marathon bombings, the death of John F. Kennedy, Jr. in a plane crash, Hurricane Irene and other U.S. weather disasters in 2011 and 2013. The twins say that they “cracked the case” of the missing boyfriend of Olivia Newton-John in 2005. They predicted various Al-Qaeda terrorist plots in 2010. In September of that year, an Al-Qaeda plot was reported to have been discovered and thwarted by intelligence agencies.

In addition to being psychic and having the ability to predict future events, the Jamisons are clairvoyants. They see ghosts, they say, including the spirits of deceased celebrities. They say that their first celebrity contact was with the ghost of Nicole Brown Simpson, who came to them during O.J. Simpson’s trial for her murder.

They have been in contact with 11 major celebrities, most of whom died young or under mysterious circumstances. In their book, “Died Too Young,” they relate their encounters with the spirits of Michael Jackson, Steve Irwin, Princess Diana, Robin Williams, Natalie Wood, Gianni Versace, Philip Seymour Hoffman, Nicole Brown Simpson, Whitney Houston, John Lennon and Corey Monteith.

While they don’t give many specific details due to privacy concerns for the families of the deceased, they say these encounters were very emotional. They have stated that Princess Diana told them she is “thrilled” with her grandchildren, Prince George and Princess Charlotte.

The twins describe receiving a clairvoyant vision as an experience in which they receive “very clear colors and visions,” which they use in their artwork and costume design. Terry explains the four “clairs” of clairvoyance: reading, hearing, empathy and knowledge of facts. The Jamisons experience all four clairs in their work.

The Jamisons also practice automatic writing. Linda describes her first experience with this psychic ability, saying that she one day began writing in archaic language on napkins and had no idea why she was writing the words, or why she was using a medieval style of penmanship. She describes automatic writing as a method of receiving psychic information about what is to come in the future.

The day before Michael Jackson’s death, she says, she was repeatedly writing “Michael” and did not know why. She also says that the information about the World Trade Center attack and Boston Marathon bombing came by way of automatic writing.

The twins’ artistic sides are evident all around them. They are identical twins and often dress alike and wear the same hairstyle. They often appear in glamorous costumes and in photographs which show off their identical features and artistic styles. In the 1980s, painter Terry was a collaborator in The Gowanus Canal Monumental Show, which showcased emerging artists in New York.

The Jamisons have been the subject of 15 documentaries, including A&E’s “Psychic Children” on CBS and the U.K, documentary “The World’s Most Psychic Twins and Me.” They have made numerous appearances on television shows, including “Good Morning America,” “The Insider,” “The View,” “Nightline” and several shows in the U.K.

The twins say receiving visions is tiring, and empathically receiving fatigue from other people makes it worse. They describe the problems they have when not working, with people descending on them for readings, questions or to offer skepticism.

When it comes to skeptics, the Jamison twins definitely have them. They have received hate mail and even death threats. They once had a stalker who was eventually caught by the LAPD – with the help of the twins’ psychic abilities. Terry says that though the word skeptic means open-minded, skeptics are actually closed-minded and simply refuse to believe in what the twins can do. Linda says that skeptics are motivated to find evidence that discredits psychics, while rejecting any evidence that proves psychic powers. She thinks skeptics may be afraid of what they don’t understand.

The twins also deal with believers who, they say, are jealous of their abilities. They say they have had their original stories and designs copied by others, and that copyright laws do not protect them from this type of theft.

In January of 2016, the twins predicted terrorist attacks across the world, some of which they say may be thwarted. They are currently in talks concerning a TV show that they would star in. Their YouTube channel, “The Psychic Twins” launched earlier this year. The channel features readings done for individuals. The twins are currently working on a second volume of their book “Died Too Young.”