Who Was Madame Helena Blatavsky? 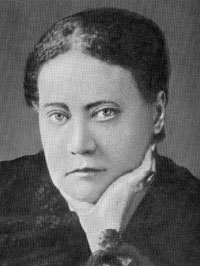 The famous Madame Helena Blatavsky was born Helena Petrovna von Hahn on August 12, 1831. Through her mother, Helena Andreevna, she was descended from a line of Russian nobility going back to Rurik, the founder of the Russian state. Through her father, Colonel Peter von Hahn, her German side could be traced back through the crusades to the Carolingian dynasty. With that family, it's no wonder that she was raised with all the luxuries available. She had a series of governesses as well as lessons in dance and music. Music became quite a passion of hers; in later years, she gave several concerts on the piano.

Despite her wealthy upbringing, she remained down to earth. Relatives report that she preferred to play with ‘street urchins' rather than with children of her own class. She was fond of all sorts of company and had a reputation for being witty, cheerful, and gregarious. Due to her father's position in the German military, the family moved frequently, so Helena had no shortage of new companions. In fact, she did not settle down until 1842, when her mother died. Helena was sent to live with her grandparents in Saratov, Russia.

In Saratov, Helena experienced a different life. Instead of the constant swirl of parties and balls from her parents' home, here she was surrounded by intellectuals of all sorts. Her grandparents hired three private tutors for her, and she impressed them all with her aptitude for studies. Her favorite place became the extensive family library, in which she had her first taste of the paranormal through medieval works on the occult.

Despite the comforts and intellectual gratification of her grandparents' home, she was eager to find her independence. In 1849, at just 18, she married Nikifor Vladimirovich Blatavsky, a much older man who was the vice-governor of Yerevan, the capital of Armenia. The marriage was strictly to gain her freedom, though, and she left him less than a year after. Her later marriage to Michael Betanelly in 1875 was even more brief, only a few months.

Entry into the Paranormal

After leaving her first marriage, Helena (now Madame Blatavsky) traveled extensively. By 1851, she made it to London, where she met her Teacher for the first time, although she claimed to have seen him in her dreams long before then. Her sojourn in London was not meant to last long; her Teacher sent her to live in Tibet for three years to prepare her for her role in life.

Unable to get to Tibet immediately, Madame Blatavsky spent the next several years in India. She later published her memoirs of those years in From the Caves and Jungles of Hindustan, which was not fully translated to English until 1975. At the time of publication, it was greeted as fiction, but she professed that large parts of it were true. In 1868, she finally made it to Tibet, where she studied the texts that she wrote about in The Voice of the Silence. This book is widely regarded as proof that she had been initiated into esoteric Tibetan Buddhism and was acquainted with high levels of lamaist teachings.

In 1873, Madame Blatavsky moved to Paris. There she began the most influential part of her life. She founded modern Western theosophy, a combination Eastern religious traditions with Western esoteric practices. She believed that theosophy was the Perennial Religion, a doctrine known in ancient times to every civilized country. There were three primary tenets to her form of the doctrine. First, there is an eternal and boundless reality in which matter and spirit are equally important aspects. Second, there is a universal law of ‘periodicity,' or evolution through cyclic change. And third, all souls are one and the same as the universal oversoul, which itself is a manifestation of the unknown reality.

Her theosophy gained traction, and in 1875 she and Colonel Henry Steel Olcott established the Theosophical Society. While he was nominally the President of the Society, she was the driving force and edited its magazine, The Theosophist, until 1888. The purpose of the Society was to form a hub for the Universal Brotherhood of Humanity and prepare the world for the World Teacher, a manifestation of an advanced spirit who periodically appears to direct the evolution of humanity.

Especially since Blatavsky and Olcott's public conversions to Buddhism in 1880, the Theosophical Society had a major influence on Buddhist modernism and the Hindu reform movement. It helped to spread both of these religions across the west and was particularly instrumental in the popularization of Theravada Buddhism.

While the organization has undergone a number of ideological splits since its founding, there are four splinters remaining active to this day. Two retain the name ‘Theosophical Society.'. One is headquartered in Adyar, India, the headquarters chosen by Madame Blatavsky herself, while the other is based in Pasadena, California. Of the other two branches, the United Lodge of Theosophists is generally outshone by the Anthroposophical Society, which is the largest of the remaining groups with over 60,000 members.

In 1888, Madame Blatavsky retired from her public life and moved to London, where she wrote her final three books: The Secret Doctrine in 1888, The Voice of the Silence in 1889, and The Key to Theosophy in 1889. Of these, The Secret Doctrine is generally considered to be the most influential. She lived a fairly quiet life until her death by influenza during the flu pandemic of 1891. After her death, her ashes were divided between London, New York, and Adyar. Her date of death, May 8, is observed to this day by her followers as the Day of the White Lotus.

Although few dared to criticize Madame Blatavsky during her life, several critics came forward in the early 1900s to argue that she had never actually had a Teacher or studied with the Masters. Instead, they claimed, she had made these figures up as idealizations or drawn them from books she had read. These claims are generally dismissed as irrelevant at best, but more serious accusations exist of racism in her teachings. While she specified that theosophy was blind as to race, she draws an explicit contrast between the Aryans, who she claims use their religion correctly as an ‘everlasting lodestar' and the Jewish people, who she says base their religious views on ‘pure calculation.'

Despite questions about her personal feelings, Madame Helena Blatavsky is certainly an important figure in any history of spirituality. Whether her work was used for good or bad, her influence is indisputable. Modern views of the spiritual would not be the same without her direction.