Who Was Mystic Healer Grigori Rasputin? 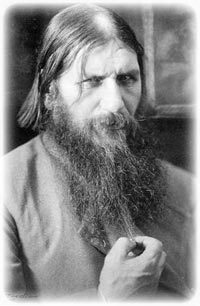 Grigori Rasputin's name has carried well into the modern age. Now he is known as a mystic and faith healer, but he started off as only a Russian peasant.

This biography will detail how one man went from a common citizen to a world-renowned holy man and trusted friend of Russia's final Tsar.

Rasputin was born to a well-off Russian peasant and postal coachdriver in the modest village of Pokrovskoe. The local parish registry record, dated January 9th, 1869, stated: “In the village of Pokrovskoe, in the family of the peasant Yefim Yakovlevich Rasputin and his wife, both Orthodox, was born a son, Grigory.”

He was baptized the following day and named after St. Gregory of Nyssa, a holy scholar. This would prove to be a fitting name when he later turned to a religious life.

It is worth noting that, as a child, Rasputin's interests were far away from the esoteric. He was born as the fifth of nine children, but only two of his siblings survived. He was unable to attend school because his small village simply did not have one.

Indeed, according to the 1897 census, almost everyone in Pokrovskoe was illiterate. Even at a young age, Rasputin was easily identified as a strange character, albeit one with certain talents.

The following description came from a local that had seen Rasputin town: “His limbs jerked, he shuffled his feet and always kept his hands occupied. Despite physical tics, he commanded attention.”

Rasputin's affinity for the spiritual did not manifest itself directly in his childhood, and he instead gained a reputation as a street fighter. Rasputin married Praskovia Dubrovina in 1887 and had three children with her; Dmitri, Matryona and Varvara. Tragically, the couple had lost three children prior to these births.

The Birth of a Mystic

Only five years later, in 1892, Rasputin left his family behind and went to a monastery in Verkhoturye. Some say that the loss of a child inspired Rasputin, but regardless of the reason, it changed his life. Outside of the monastery he met a hermit named Makary, whose influence inspired him to give up meat and alcohol. When Rasputin returned to his village, he had become an enthusiastic convert.

Upon his return, Rasputin made claims that he had seen a vision of Our Lady of Kazan, which had inspired his new enthusiasm for mysticism. Only a short time later, in 1900, Rasputin was a wanderer who visited holy sites and lived off of charity. Rasputin had not lost all of his familial ties, however. He was noted to still return home each year to help during the sowing and harvest.

All of these behaviors attracted attention to Rasputin. By 1902, he could no longer hold private gatherings in his home because the villagers were paying him too much attention. One year later, Rasputin decided to visit Kiev, which was around 1,860 miles from his village to visit the Monastery of the Caves.

It has been recorded that in Kazan, his interpretations of scripture were so original and thoughtful that the nobility, upper class and even the bishop of the region would listen to his sermons.

Between 1903 and 1905, Rasputin arrived in St. Petersburg became acquainted with Tsar Nicholas and various forms of nobility. In October of 1906, at the Tsar's behest, Rasputin visited the wounded daughter of the upcoming prime minister Pyotr Stolypin in Tsarskoe Selo. His daughter had been wounded several weeks prior by a Maximalist bomb attack that had killed 29 people. Not much is recorded of Rasputin's visit, but the prime minister's daughter made an almost miraculous recovery.

In August of 1907, Rasputin was invited to see the Tsar's son, Tsesarevich Alexei. Alexi had received an injury that caused him painful bleeding, and it is now known that he had a kind of hemophilia that was common in European royal families. The doctors could find no cure, but Nicholas' wife, the Tsarina Alexandra, insisted upon looking for help elsewhere.

She had lost her mother, brother and younger sister, and could not bear to lose her son as well. Rasputin had earned a reputation as a holy healer, and was able to ease the minds of Alexi's parents as well as ease the pain for the boy. The doctors insisted that Alexi was doomed to die, but the young boy reported feeling better upon the following day.

Unfortunately, poor Alexi was not out of the woods yet. On October 9th of 1912, Alexi was in such poor condition from a swelling in his groin that he was given the last sacrament. The family had been on a hunting retreat in the Białowieża Forest, but moved on to Spala.

It was recorded that, during a drive in the woods, the “juddering of the carriage had caused still healing hematoma in his upper thigh to rupture and start bleeding again.” Alexandra was distraught, hardly ever leaving her son's bedside. The Tsarina begged her best friend and lady-in-waiting Anna Vyrubova to convince Rasputin, who was now out of royal favor, to save her son.

The next day, Rasputin responded to Vyrubova's request with a short telegram that said: “The little one will not die. Do not allow the doctors to bother him too much.” Impossibly, Alexi's temperature dropped and his injury healed over the course of the following year.

Rasputin's life was far from without controversy. Even before his arrival in St. Petersburg, the Russian elite were obsessed with the mystical, and Tsarina Alexandra was no exception. She had reportedly been looking for a middle-man to allow her to commune with God, but had found limited success. As Rasputin found favor with the royal family, he found disdain among the rest of the Russian nobility.

While the Russian nobility initially found Rasputin profoundly interesting for his new preachings, they quickly grew envious of his various social privileges and access to the Tsar's family. Within the span of four months in 1909, Rasputin had visited the Imperial Family six times, an inconceivable number to the St. Petersburg ruling class.

Tsarina Alexandra's own mother disagreed with her continued support of Rasputin, and soon the press released stories claiming that he was overly interested in young girls and women. When returning to St. Petersburg after a visit to his village, Rasputin was reportedly sent home only three weeks later due to social pressures.

In 1911, the Tsarina advised Rasputin to become a pilgrim to escape the scandals of the Russian courts. Rasputin obeyed and spent a year visiting holy places like Constantinople and Jerusalem. Upon his return in 1912, rumors flew that Rasputin was the consort of Tsarina Alexandra. When confronted with these rumors, Tsar Nicholas said “I know Rasputin too well to believe all the tittle-tattle about him.”

Rasputin spent the final years of his life amidst a flurry of rumors and political scandals. In World War I he begged Tsar Nicholas not to go to war, and warned that if Russia engaged in war, it would lead to the end of the royal family. As Nicholas was the final Tsar, it would seem that this prediction came true.

In a political coup that had too many conspirators to name, two men went to Rasputin's apartments on December 17, 1716 at 1 in the morning. They collected Rasputin, who had been invited to a fake party at the Moika Palace, and brought him to a sound-proof room that had been specifically prepared for his murder.

There were four kinds of sweet wine in the room, presumably so that the men could be drunk when they killed Rasputin. One of the men, Felix Yusupov, offered Rasputin tea and food that had been heavily dosed with cyanide. The men continued to discuss spirituality and the occult, but Rasputin never succumbed to the lethal dose of cyanide. Indeed, he continued to drink wine until he was quite drunk.

Enraged, Yusupov shot Rasputin in the chest and he fell onto the bearskin rug, seemingly dead. But only seemingly. With a severe bullet wound and more than lethal amounts of cyanide in his veins, Rasputin opened his eyes and began to struggle. Finally, as Rasputin ran outside, Yusupov shot him again, ending the mystic's life.

Surrounded by impossible miracles as much as political scandals, not much of Rasputin's life is known for certain. What is known is that he performed incredible feats with his faith, and continued to do the impossible until his death.

While rumors of Rasputin's alleged promiscuity followed him for years, he was so despised by Russian nobility that it is hard to give the rumors credence. The truth may never be known, but the legend of Grigori Rasputin will continue for centuries to come.