Who is Esther Hicks? 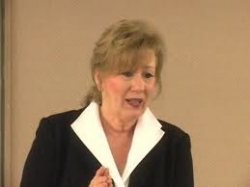 Esther Hicks is a well-known author and a renowned American motivational speaker. Through her teachings, she has helped literally tens of thousands of people across the globe to be more self-empowered and self-aware. Esther has co-authored several books along with her husband Jerry Hicks, who recently passed away in 2011. Together, they have presented a number of workshops on the topic of the law of attraction with “Abraham” and Abraham-Hicks Publications.

Esther made an appearance in the original version of the wildly popular film ‘The Secret' in 2006. The Hicks' best-selling books, one of which is still quite popular today called ‘The Law of Attraction', made it to the top of the best seller's list. The books, as Esther states, are translated from a collective group of intelligent non-physical beings known as ‘Abraham'. Esther does not prefer to use the term “channeling”, but rather describes her experience as tapping into and receiving blocks of information from ‘infinite intelligence' and then interpreting that information into a language we can all understand.

Esther Hicks was born in Coalville, Utah in 1948. She married Jerry Hicks in 1980 who was successfully selling Amway at the time. In his younger years, Jerry performed in the circus as an acrobat in Cuba for a few years. Later, starting in 1948, he toured as a musician, comedian, and MC. Esther has a child from a previous marriage, a daughter named Tracy. Jerry Hicks died from cancer in November 2011, but still remains a vital part of team ‘Abraham Hicks' today.

The Teachings of Abraham

According to Esther Hicks, Abraham is an infinite stream of consciousness, or a collective group of beings that she “interprets” in order for us to hear their messages. Abraham describes themselves as a collective consciousness that come from the nonphysical infinite dimension. They also claim that they are that which we are. In other words, we're all one despite the fact that they're from another dimension. They are pure spirit and pure positive energy. Some say that's “God”, or Source Energy. The feeling of pure joy, exhilaration, and great love is Source Energy, which is also ‘Abraham'.

In essence, we are all extensions of Source Energy. Esther herself refers to Abraham as ‘infinite intelligence'. Abraham's teachings, through Esther, are based on this incredible experience. The fundamental principles of Abraham's teachings suggest that everyone creates their own life, or reality, with their thoughts; and that their emotions are continually guiding them towards the direction they desire in life. This is a thought-based Universe and so the only thing that matters is how you feel. Abraham has been teaching, through Esther, since 1986. Here are just some of their philosophies:

As previously mentioned, Esther Hicks was a part of the original version of the popular film The Secret in addition to being a primary reason for inspiring the film itself. The footage that featured Esther was later removed after the creator of the film Rhonda Byrne withdrew the original contract that covered Esther's participation and requested that she give up her intellectual property rights concerning these areas due to contractual litigation and disputes. Esther stated that she was somewhat uncomfortable with their manner of campaigning and that it was just best to move on. While not criticizing Byrne, she felt it was best to withdraw her support, which is why she never actually appeared in the finished version of The Secret. Esther has also been interviewed several times by Oprah and a guest on talk radio as well.

Abraham-Hicks books include ‘Ask and it is Given', ‘Money and the Law of Attraction', and ‘The Amazing Power of Deliberate Intent', just to name a few. The words on the pages are written from the perspective of Abraham and have helped thousands upon thousands of people worldwide.

Esther Describes Who Abraham Is

Sometimes there are no words to describe a certain place or thing, such as Abraham. Abraham is a name that represents many beings collectively, or entities, coming from pure positive love and light. Abraham is a feeling, or symbol of infinite intelligence. When asked who or what Abraham is, Abraham (through Esther) replies that there a nebulous mist of pure energy.

Louise Hay of Hay House Publishing states that Abraham are the best teachers that exist on the earth today. Bestselling author and speaker Dr. Wayne Dyer says they're the greatest masters of the Universe.

A real who's-who of veritable authors, teachers and speakers alike continue to openly acknowledge and immensely praise the incredible value of the great wisdom that comes forth through the essence of Esther.

Abraham, a collective consciousness from a dimension that's free of all space and time, is literally the heart of all religion. And, that we (humans) are the leading edge of thought. Abraham tells us (through Esther) that whenever we experience moments of pure joy, exquisite bliss, great exhilaration, love, and even the ecstasy of sexual energy flowing through our bodies, that's the pure energy of Source Energy, and that's who essentially Abraham is.

Even though Esther's husband, Jerry Hicks, has emerged back into the pure positive energy dimension, Esther continues holding seminars all over the country without him in a physical sense, but present through spirit. She continues to let the essence of Abraham come through her so we can experience their teachings and guidance ourselves. Esther suggests that each one of us should check out Abraham for ourselves, and that it's the only way to go. If listening, watching, or reading Abraham's words feels good and resonates with us on some innate level, then we're on the right track and in the right place.

Jerry Hicks summed it up well when he said that he doesn't really know what Abraham is, nor does he really care. All he knows is that there wisdom is enhancing his life as well as the countless lives of others. Abraham – they are what they are. Period.

Esther Hicks thoroughly enjoys her work of bringing Abraham forth through her own spirit, and doesn't plan to stop anytime soon.