Who Was Emma Hardinge Britten? 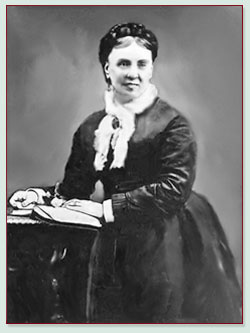 Emma Hardinge Britten (1823-1899) is remembered for being the early Modern Spiritualist Movement's most respected proponent. She is remembered much more than many people who lived during her era due to the fact that a large portion of her life was chronicled. Emma's unfinished autobiography was published. It was edited by her sister. Many of her writings on the spiritual movement, as well as the speeches she gave, were also compiled and published.

This allowed people from later generations to gain a greater understanding of her life and the values that were important to her. Known as a practitioner, orator and writer, she wrote the books “Nineteenth Century Miracles” (1884) and “American Spiritualism” (1870). Both of these books are immensely detailed accounts of the Modern Spiritualist Movement's origins and history in the United States.

Hardinge was born Emma Floyd in 1823. Raised in London, England, her father made his living as a captain on a ship. He died when Emma was still very young. This instilled within her an independent nature, as she became the major breadwinner, supporting her entire family. She earned money by teaching both acting and music classes beginning at the age of 11. It was during these formative years that Emma first began to demonstrate her abilities as a spiritual medium.

When she was still an adolescent, Emma amazed various people she met by telling them their future. She would do this by describing to them the parts of their lives that she saw in visions. She would prove the authenticity of her ability to skeptics by providing information about dead loved ones that she had no previous knowledge of. When she would give live piano recitals, she also had the habit of playing songs that members of the audience wanted to hear, before they had a chance to request them.

In Emma's autobiography, she noted that her clairvoyant abilities led her to become a member of a secret society of occult members in London. This group frequently conducted experiments by using clairvoyant techniques and magnetics. Although little verifiable information exists from Emma's time in this secret occult, historians believe this is where she got the name Hardinge. She would keep this name for the rest of her life.

Emma was involved in a case that is famous among the psychic medium community. While she was in a trance, she began to relay details that were being provided to her by the spirit of a dead crew member of a ship that was used to carry mail called the Pacific. The ship had sunk under mysterious circumstances. The information that Emma revealed while in her trance was so damning that the owners of the ship threatened to prosecute her. However, all of the information was eventually released to the press. After an investigation was conducted, it was determined that all of Emma's information was 100 percent correct.

Her gifts as a medium spanned a number of different areas. Inspirational speaking, healing, inspirational and automatic writing, prophecy and psychometry were all areas she was known to have excelled in. She was so gifted in terms of public speaking that she never wrote down or rehearsed any of her speeches in advance. In fact, the topics she would speak about were usually selected by people in the audience.

She eventually made her way to the United States in 1856, settling in New York City. In an effort to compile material for a book about American gullibility, Emma began to attend a large number of séances that were conducted by Spiritualists. However, something unexpected started to happen to her. She eventually started to relive various events from when she was a child. It was because of these experiences that she became more interested in learning about the Spiritualist movement. She wound up becoming a member and was granted an invitation by Horace Day, a noted Spiritualist, to be the host of various séances that were conducted by the Society for the Diffusion of Spiritual Knowledge.

As time went by, her activities in the Spiritualist movement became more involved. She started to conduct trance lectures, going on tour and delivering speeches in many cities. “What Is the Basis of the Connection of the Spiritual and Natural Worlds”, “Hades”, “The Philosophy of the Spirit Circle” and “The Discovering of Spirits” were some of the topics she covered in her speeches.

Her passion for the Spiritualism movement was unmatched during her time. She devoted many years of her life to traveling the world and educating people about the movement in the hopes of attracting new members.

Emma also had an interest in politics. In 1864, she began to campaign to get Abraham Lincoln re-elected as President of the United States. It was in support of this effort that Emma delivered a very well-received lecture with the title “The Coming Man; or the Next President of the United States.” The success of this lecture led to Emma being given an invitation to begin a lecture tour of 32 cities.

On April 14, 1865, Emma delivered the speech she is most famous for. It was regarding the assassination of Abraham Lincoln, which had occurred only 36 hours earlier. The speech received a massive amount of praise from journalists, calling it a remarkable achievement in helping the country to heal from the tragedy.

Emma wrote and published “Modern American Spiritualism” in 1870. This was a book that went into great detail about her participation in the Spiritualist movement. It was basically an encyclopedia which included all of the important people and events that were critical to the founding of the movement. Emma married William Britten, a spiritualist from Boston, in the same year. Even though she was now married, all of Emma's future writings were published using Hardinge as a surname. This was because of the fact that Emma was already a well-known author prior to getting married.

Emma decided to get into the magazine publishing business in 1872. However, “The Western Star” ceased publication when Boston experienced a series of fires, causing her low-income readers to cancel their subscriptions. Only six issues of the magazine were published. After the failure of the magazine, Emma returned to New York City, where she became one of the founding members of the Theosophical Society.

She later turned her attention to editing a book that was about Theosophy. “Art Magic or Mundane, Sub-Mundane and Super-Mundane Spiritualism” was originally published in 1876. There is some debate among historians as to the book's true author, with some believing that Emma may have received help from another person. Emma and her husband started to work in various Spiritualist missions located in New Zealand and Australia during the late 1870s. A Spiritualist newspaper published on a weekly basis called “The Two Worlds” began to be published by Emma in 1887.

Emma's most important written work is considered to be “Nineteenth Century Miracles”, published in 1884. This was a comprehensive chronicle of everything noteworthy pertaining to the Spiritualist age. As she grew older, she had a desire to return to her homeland which she had abandoned decades earlier. She lived the final years of her life in England, finally dying in Manchester in 1899.