Who Was Elizabeth Baron? 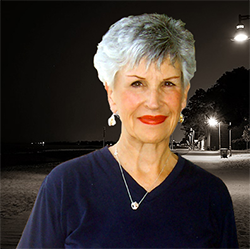 Most notoriously, Elizabeth would go into deep trances and connect with, and deliver messages from, as many as 150 people in a single setting.

Most of her work has been documented on video and audio tape as well as in print. For nearly three decades she hosted and appeared as a guest on national radio and television as well as being internationally published in newspapers, free professional newsletters, and the Internet.

Elizabeth has been most noted for her work on missing persons and high-profile police cases. A significant contribution came during a national radio broadcast when she sketched one of the beltway snipers for law enforcement. She also offered predictions and commentaries on national issues.

Who Was Elizabeth Baron?

Elizabeth Baron was a child of the Tennessee hills. Her youth was as much tumultuous as it was enlightening. At the tender age of five her father shot himself in front of her. Near the same time, she was diagnosed with terminal cancer and given three months to live. Elizabeth was healed of cancerous tumor under her tongue by neighborhood ministers administering the laying on of the hands. “They told me that God would bless me with the gift of prophecy.” It was during this time she discovered her gift.

She was put into no less than fifteen foster homes after her mother passed. Her empathy and compassion blossomed from her own experienced early childhood trials and pain. At 13 years old, she stood up in a church in Oak Ridge, Tennessee and “gave her life to God,” asking to be one of His “missionaries for life.”

Elizabeth Baron’s life continued uneventfully enough, working for the Director of Military Personnel, 14th Air Force, then to Secretary to Deputy Base Commander at Robbins AFB, Georgia after finishing business college. At the Chrysler Missile Division at Redstone Arsenal, Alabama, she worked closely with German prisoners of war.

She also worked on schematics for the Jupiter program that launched the first US missile into orbit. Elizabeth married a “war hero” and moved to Chicago becoming a job placement expert, lecturing and facilitating raining classes. However, that marriage and the next to a Chicago Chief of Police both ended bitterly.

A 2010 documentary picks up here, depicting single mother Elizabeth Baron waking from a coma after a brutal beating resulting in rape, a skull fracture, brain concussion, and newly realized paranormal abilities. She experienced a vision from a mountain top and the Almighty’s reminder of her promise she made at 13. “It is time to do your mission,” she was now being told.

Elizabeth Baron was a devotee of Italian fourteenth-century nun, St. Catherine, who she routinely channeled “for the good of the world.” At the time of St. Catherine’s death, the nun was attempting to heal the Great Western Schism. The nun’s historical writings are considered some of the most inspirational within the Catholic Church.

Elizabeth purported to have experienced premonitions, visions, and visits of St. Catherine since she was six years old. Baron’s “St. Catherine's Monthly Message to the World” has been published for twenty years. It is not unusual then, that Elizabeth Baron also performed exorcisms for spiritual healing and universal betterment.

Holding her own against skeptics and ridicule, Elizabeth’s visions routinely revealed truth in the faces of doubt and nay-sayers. She has counseled and taught in a variety of places around the world since 1987. Her clientele range from Fortune 500 companies, CEOs and Executives, television and media, students, religious leaders, John Smith and Jane Doe.

She warned Regan of an impending assassination attempt. She consulted on high profile law enforcement cases, aiding local as well as FBI and Secret Service. She counseled clients overcome by depression, alcohol, and drugs, helping them replace bad habits with good senses of responsibility, stability, and purpose.

Elizabeth functioned as a channel for life readings and ran a meditation and prayer center, The New Life Center, on James Island. Through lessons of meditation and learning how to “go within,” she helped clients get to know their inner spirit and discover their life purpose for themselves. Her website has been up for more than ten years, and heavily trafficked. She worked every day, although she concluded that being too public all the time tended to lessen the magnificent impact of her gift to the masses.

Elizabeth Baron is “the world’s most documented medium.” Among her more publicized cases are:

Similar to Edgar Cayce, Elizabeth read the Akashic records – the Soul. She prayed to the Holy Spirit and channeled what her clients needed to know from their depths. She conveyed general advice, health issues,” the purpose for that soul being here,” relationships, future and hope, etc.

Elizabeth Baron believed that becoming aware of one’s own divinity and aiding in one’s connection with Source was the best gift she could give. Through meditation and natural techniques, she believed, one may de-stress and improve one’s quality of life, including one’s “mind, body, behavior, and environment.”

She believed through meditation and prayer one may discover and fulfill their life purpose. She believed it is possible to achieve fulfillment by realigning the conscious with the subconscious with Spirit. She never believed a “reading” interfered with one’s religious beliefs.

In fact, she believed when done properly and sincerely, meditation and prayer enhanced one’s spiritual connection with Source. She considered herself a psychic channel and “a life reading would make you more responsible for your relationship with the Creator.”

She believed one may discover their innate creativity and intuitiveness and become truly connected and clear in their consciousness through daily meditation and prayer. Although she would never endorse removing needed and necessary prescribed medications, she believed one may help heal themselves mentally, emotionally, and physically through mediation.