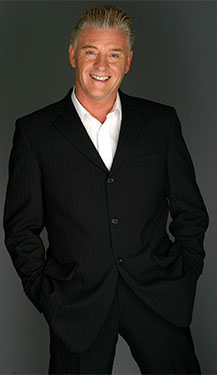 Derek Acorah is one of the world's most famous psychics, and is sometimes known as Britain's Top Medium. Despite his fame, he keeps his personal life relatively private. He's been married since 1995 to his wife Gwen, and they live with their two dogs and a menagerie of fish, chickens, and ducks in Lancashire, England, across the country from his birthplace near Liverpool in Merseyside.

Acorah was born on January 27, 1950, with the name Derek Johnson. He later changed his name in honor of his grandmother: Acorah was her maiden name. His grandmother was his biggest supporter in his early years. When he came to her as a child with the story of being visited by the spirit of his grandfather, she confided that she too was a medium and encouraged him to cultivate his gift.

Despite his paranormal talents, Acorah started off life as a football player. He spent the earliest part of his career playing for Liverpool Football Club before leaving to play in Australia for several years. Upon returning to Liverpool, he decided to take his grandmother's advice and use his gift instead of returning to playing football. He opened a small shop on the outskirts of town where he did one-on-one sittings as a medium. His success soon led him to move to an office in city center, where his popularity grew quickly.

Acorah's big break came in 1997 when he was approached by a representative of Granada Breeze, a satellite arm of Granada Television in Manchester. The station's most popular program was a daily show called Livetime, where they wanted a psychic to discuss the reading of tea leaves in honor of National Tea Week. Although Acorah protested that he was not a tea leaf reader, the representative was insistent: Her aunt had taken part in an excellent reading with Acorah not long ago, and he was the only one that she wanted to be on the show. Eventually, Acorah agreed to appear on the program, where he so impressed the audiences that the producers invited him back.

After that first appearance, Derek Acorah became a fixture on Granada Breeze. He appeared there every week for the next five years. The producers, taking advantage of his popularity, created two new shows to highlight him. He became a regular on both Psychic Livetime and The Psychic Zone. They soon gave him his first solo show: Predictions with Derek Acorah. The show was divided into two segments. The first part of the show was devoted to doing readings with his small studio audience, while the second involved traveling to locations around the country where he would open his mind to the atmosphere and the spiritual vibrations in order to understand the history of the location. This show made Acorah quite famous, not just in the UK but internationally.

The year 2001 marked another upswing for Acorah's career. After returning from California where he had been shooting the pilot for Connections with Derek Acorah, he signed on to a show called Haunting Truths for Granada Breeze. Unfortunately, the station folded shortly thereafter, but they sold the show to LivingTV, who renamed it Most Haunted. This was the show that really put Acorah on the map, and he stayed with it for almost six full seasons.

Most Haunted was one of the first shows of its kind. It featured a small team who traveled to various haunted or historically important locations where Acorah, the show's medium, would investigate paranormal activity to get what information he could about the place's history. Afterward, the information would be analyzed by a historian and parapsychologist to verify Acorah's findings and try to create some sort of balance between paranormal and scientific explanations for any strange phenomena.

Acorah's involvement with the show ended amid some controversy shortly before the end of the sixth season. Shortly before beginning an investigation, Ciaran O'Keefe, a parapsychologist involved with the show, gave Acorah some false information about a character called Kreed Kafer. Later, on the show, Acorah claimed to be possessed by the spirit of this Kreed Kafer. O'Keefe came forward after the episode to say that he had made up the character entirely; the name is actually an anagram of Derek Faker. O'Keefe repeated his little experiment again with another fictional character he called Rik Eedles (an anagram of ‘Derek Lies'), with the same result. The producers took this as evidence that Acorah was a fake and asked him to leave the show in order to preserve its credibility.

Despite the controversy, Acorah still claims that he had decided to leave the show over a year earlier and that there were no hard feelings between him and the production team. In the years immediately following his departure, he had no shortage of other opportunities. He worked on a variety of shows, the best known of which was Derek Acorah's Ghost Towns. This show was much like Most Haunted, but involved less well-known locations which were mostly brought to his attention by viewers eager to have their local haunted houses investigated by such a famous medium. He also worked on Antiques Ghost Show, in which he helps families decipher the secrets of their family heirlooms, and he briefly had a show on Sky Real Lives which was simply called Derek Acorah.

Despite these successes, his fame began to decline somewhat after his time on Most Haunted ended. His most notable failure in this period was his 2009 investigation into Michael Jackson's spirit, which was voted the worst TV program of 2009 in a poll of over 9000 Yahoo! users. He also suffered a great deal of criticism in 2012 when he claimed spiritual knowledge of the death of Madeleine McCann, a 9-year-old girl who had been missing for four years. While he claimed to be trying to help her parents move on and assured them that she would be reincarnated soon, the consensus in the media was that he was simply trying to get some publicity after sliding so dramatically from the spotlight.

Despite Acorah's recent fall from grace, he remains one of the most influential mediums in British history. His programs have had a great influence on the public perception of the trade, as well as the future of paranormal television shows. All controversy aside, he retains a loyal following and is currently on tour throughout the UK with a well-reviewed live stage show.