Who Was Daniel Dunglas Home? 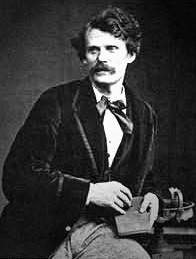 Daniel Dunglas Home was a renowned Scottish physical medium. Witnesses claim that he could levitate his body, produce rapping noises in houses at will and even speak with the dead. One of the most famous men of the late 19th century, he was hailed by Harry Houdini as “one of the most conspicuous and lauded of his type and generation.”

Born in Currie, Scotland, in 1833, Home’s mother, Elizabeth, was known in the area as a seer. His father is believed to be an illegitimate son of the 10th Earl of Home, and there are some various payments made to William Home by the Earl that support this claim. However, Daniel’s childhood was modest at best. Daniel had five brothers and two sisters. One sister drowned at the age of 12, and one of his brothers died at sea while traveling to Greenland at the age of 17. It is reported that Home saw the death of his brother in a vision, and the news was confirmed five months later. Daniel himself was thought to have a “nervous temperament,” and he was actually raised by a childless aunt and her husband.

A Teenager in America

Between 1838 and 1841, Home’s adoptive parents moved to the United States with their son. After emigrating over, they settled in Greeneville, Connecticut, where Home became known as “Scotchy” by his classmates. He had one good friend growing up, a boy named Edwin. They were very close, and the made a pact that if one of them died, the other would try to make contact after the death. Home and his aunt moved to Troy, New York. The friends lost contact with each other, but Daniel saw a brightly lit vision of Edwin at the foot of his bed one night. Edwin circled in the air three times before vanishing. A few days later, Daniel received a letter confirming the death of his childhood friend.

After returning to Greeneville a few years later, there were reports of rapping and knocking on the walls of Daniel’s household. Wesleyan, Congregationalist and Baptist ministers came to the home to review the situation. They all believed that Daniel was possessed by the Devil, but Daniel believed that he had a gift from God. The noises were attracting unwanted attention from the neighbor’s and Daniel was asked to leave the house. He remained in the states for several years, but he eventually returned to Europe. He had two wives over the course of his life. He had one child with his first wife, Alexandria de Kroll, but she died of tuberculosis in 1862. He married his second wife, Julie de Gloumeline, in 1871 and remained with her until his death. There were false reports of his death in 1876, but he actually lived until June 21, 1886.

Daniel stayed with friends in the towns of Willimantic and Lebanon, Connecticut. During this time, he performed séances, healed the sick and spoke with the dead. He did not hold a job during this time, and he never actually asked for money, but he was able to survive off donations and gifts from admirers and those people he helped. He developed a solid following of believers who witnessed his acts and believed in his ability. He also had many skeptics, including Robert Hare, the inventory of the oxy-hydrogen blowpipe, and John Worth Edmonds, a judge on the Supreme Court. However, these skeptics are reported as saying that they did not believe Daniel Home was fraudulent.

There are records of Home performing several amazing feats. In one case, he caused a table to move around the room although he was nowhere near it. Two of the witnesses had to use all of their strength to hold the table still, and the rocking continued even when they sat on it.

In 1852, he levitated about a foot off the floor. Two people tried to hold him down, and the rose into the air with him. He could also levitate other people, and once lifted a host’s elderly mother along with the chair she was sitting in.

He was known for his séances and talking with the dead. While traveling in Europe in 1857, he held a séance with Napolean III and his empress, Eugenie. The woman held a spirit hand she believed to be her father’s because it had the same characteristic deformity on one of the fingers.

He could elongate his body by as much as eleven inches, and then return to his normal size. Perhaphs his most famous performance involved a combination of levitation and elongating his body. He was conducting a séance for three men in his London apartment in 1868 when he elongated his body and rose off the ground. He returned to the floor, walked into an adjoining room and then reappeared outside the window in the first room. He was floating in the air three stories above the ground. He opened the window, glided into the room and then sat down.

In addition to levitating and communicating with the dead, it also appeared that Home was immune to fire. He could hold white-hot embers in his hands without causing any visible damage or pain. He was also seen putting his hands and face into a heart fire, moving them around as though in a pail or water, and then emerging without any visible injuries.

Throughout the course of his colorful career, many people tried to determine how Home accomplished his feats. There were members of the Christian community who tried to call him a fraud, and several scientists who tried to show that his acts were nothing more than parlor tricks and slight of hand. What sets Daniel Dunglas home apart from other physical mediums is that none ever succeeded in proving his acts fraudulent. There were some theories and speculation, but even the most intent critics could ever determine how he managed to levitate or perform other acts. He never had a home as a steady base, but he was often the guest of Kings, Emperors, important heads of state and other wealthy patrons. It is believed that he conducted more than 1,500 seances, and his abilities were witnessed by skeptics and believers alike all across Europe and the United States.