Who Is Allison DuBois? 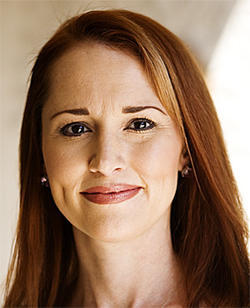 Allison DuBois is a world-renowned medium, a criminal profiler, and a New York Times best-selling author. The NBC show, Medium, is closely based on Allison's life and was inspired by her first autobiographical novel, “Don't Kiss Them Goodbye.” Allison uses her supernatural gifts to aid officials in the apprehension of heinous criminals and to spread messages of hope and love throughout world.

Allison DuBois was born on January 24th, 1972 in Phoenix, Arizona. DuBois realized her supernatural abilities at the young age of six, when she was visited by the spirit of her deceased grandmother. Although Allison was quite aware of her ability to communicate with the dead early on in childhood, it was not until she was 17 years old, that she really understood the profound nature of her gift.

At age 17, a spirit told Allison that she must move her bed from one side of her room to the other. Luckily Allison followed the spirit's orders, because two hours later, while she was in bed, a truck drove through her bedroom wall in the exact spot the bed was previously located. Allison states that after that life-altering intervention she was completely “on board” with the whole medium thing.

After graduating high school, Allison attended Arizona State University, where she studied Political Science. While attending college, DuBois interned with an Arizona District Attorney. Allison has always had an immense passion for law and aspired to be a lawyer, but she soon discovered that utilizing her sixth sense to locate missing children and profile hardened criminals was her true calling.

DuBois believes that her abilities are a gift that was bestowed upon her because she embodies the strength and determination to effectively utilize the psychic realm to impact society. In-spite of the fierce opposing efforts of skeptics, she has successfully managed to use her extra-ordinary powers to contribute to many arenas in society, that, traditionally, were off-limits to the world of the supernatural. Because of her relentless nature, she has helped the FBI and Texas Rangers solve many cases, and continues to do so to this day.

Allison's involvement with federal agents and law enforcement stirred up all kinds of controversy and criticism. Allison's credibility was, and still is, always questioned. She seized every opportunity to prove the legitimacy of her psychic abilities.

The most noteworthy evidence that validated the accuracy of her predictions, was a scientific study conducted by University of Arizona professor, Dr. Gary Schwartz. Dr. Schwartz spent four years scientifically testing Allison's psychic powers and concluded that, she in fact, was drawing reliable information from a source outside herself.

After finishing up the study with Dr. Schwartz in 2005, Allison's first book, Don't Kiss Them Goodbye, was published and flying off the shelves. Don't Kiss Them Goodbye chronicles Allison DuBois' life, particularly her childhood and the world-shattering effect that her father's death had on her life. Allison's novel soon became a New York Times bestseller and was shortly, thereafter, adapted into the popular television series called Medium.

Allison is very happy with the portrayals of her family and says the likeness between the characters on the show and her family members is uncanny. She does, however, think that the character based on her in the show is far more liberal and much more “calm” than she is in “real life.” Allison says that she learns how relax and how to let things go from the TV version of herself. The television show Medium aired from 2005 to 2011 and was cancelled in 2012.

In 2006, only a year after releasing her first novel, Allison finished her second book, “We are Their Heaven: Why the Dead Never Leave Us.” She says that she wrote this book because so many of the people that cross over always ask her to tell their loved ones that they enjoyed the celebrations and gestures of love that their surviving family members put together in their honor.

Her second book explains how involved the spirits from the other side are in our lives. Allison describes heaven as a place that each person creates, individually, by combining all of the deceased person's favorite people, places, and memories from their previous life. Like her first book, her second book was a sensation and became a New York Times bestseller.

Allison's third book, “Secrets of the Monarch: What the Dead can Teach Us About Living a Better Life”, was released in 2007. Her third book emphasizes the importance of living a life free of regret. The spirits she communicates with speak a lot about things they wish they could change or do differently about their lives. Allison embraces this “seize the moment” philosophy and even created a “bucket list” that she actively pursues the completion of.

Her fourth and final book, “Talk to Me-What the Dead Whisper in Your Ear”, was completed in 2011. Her last book delves into loss and how to cope with it. She devotes a chapter to children with abilities and explores the common issues involved. A lot of the topics of her fourth book are derived from her family and their experiences. No matter how busy her career life gets Allison's primary focus is always on her family.

Allison DuBois met her husband Joe DuBois at a popular college hangout near Arizona State University. After graduating with a Bachelor's Degree in Political Science, Allison married Joe. Joe had no idea that Allison was a medium until after the birth of their first daughter, which was two years after they were married! He is very supportive of Allison's career and helps in whatever ways he can. They are the proud parents of three daughters: Aurora, Fallon, and Sophia. Allison believes that psychic abilities are genetically inherited and that all three of her daughters inherited her heightened intuition.

Allison currently balances her time between her family, conducting seminars across the country, and volunteering to help in missing-persons and criminal cases. DuBois still supports the research of mediums and is an active member of Veritas Research Program Mediums Committee and The Forever Family Foundation's Medium Advisory Board.

Allison DuBois has made an astonishing impact in this world in a very short period of time. Her work is far from done, and yet she is already a pioneer of the industry.