Who Was Allan Kardec? 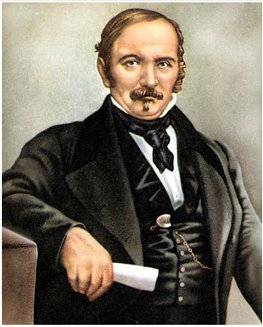 Hippolyte Leon Denizard Rivail was born in Lyon, France on October 3, 1804. He is known for the official organization of Spiritism and for writing a series of books under his Celtic pen name, Allan Kardec. The series is in five parts, which make up the Spiritist Codification. Kardec is recognized as the father of Spiritism.

Kardec’s family was Roman Catholic, so he was raised under the auspices of the church. He also studied science and philosophy. While he was at the university, he met Johann Heinrich Pestalozzi and become his acolyte in Switzerland.

Kardec earned his Bachelor of Arts in science and also completed his Ph.D. in medicine. He was an intelligent person who could speak several languages fluently, including Spanish, Italian, German and English. He did a lot of traveling around Europe teaching and studying.

As a scholar, Kardec was part of educational societies such the Acemeie d’Arrass, Royale des Sciences, des Lettres et des Arts (The Royal Academy of Arras and the Societe d’Encourgement pour l’Industrie Nationale (The Society for the Encouragement of National Industry).

He was also a member of the Societe des Science Naturelles de France (Society of Natural Sciences of France) and the Institut Historique (The Historic Institue of Paris). He was a man of society and intellect that instantly drew people to him.

Allan Kardec had a special interest in education. The teaching model that was started in the schools of France and Germany were organized partly by the work of Kardec and Pestalozzi. Kardec believed that everyone should have a chance to be educated, so he set up free courses and taught them to people who normally could not afford college classes.

He translated several things during his work as an educational writer and teacher. One of his most well-known translation was the works of Felelon from German to French. Felelon had a great influence on the young intellectual. Since he had worked for several years with Pestalozzi, he was a promoter of Pestalozzian pedagogy in France. Kardec founded many schools throughout his home country. He married Amelie Gabrielle Boudet, who was also an intellectual, in 1832. She was a teacher and an artist who shared his interest in the occult.

In the mid 19th century, seances were in vogue for entertainment for old and young alike. It was about this time that Kardec’s interest in spiritism piqued and he was involved in several seances. People of that time were fascinated by alleged phenomena where supposed spirits tried to communicate with the living through a series of tapping. Participants tried to use this tapping to form a code of spiritual communication.

Kardec wanted to investigate these strange occurrences on a scientific level. This was an era when the iconic “witching boards” became popular. Participants of the seance asked questions the spirits allegedly moved an object or pendulum to various letters to make words. Sometimes, it would just indicate “yes” or “no”. Kardec felt that there was a plausible explanation for such paranormal activities.

Among the theories of Kardec considered was a popular theory proposed by Franz Mesmer, a German scientist. According to Mesmer, there was an invisible connection between animate and inanimate objects, which he termed animal magnetism. After doing some experimentation with paranormal activities, Kardec was not convinced that Mesmer’s theory was an acceptable explanation.

One of the main phenomena that Kardec studied was in the realm of psychic mediumship. As an educated scientist who was taught to be skeptical , Kardec said that further testing should be done into mediumship to see or there were any rational explanations behind some of the psychic phenomena that were being observed.

He suggested that observers could be victims of mass hallucination or other unconscious activities that could explain the strange events. Some phenomena could be dismissed as a hoax, he believed. Even in those times, unscrupulous practitioners used trickery in order to extort money from their gullible clients. Kardec was interested in any scientific evidence that would support clairvoyance and telepathy. He had witnessed some events that he believed were genuine. He just believed there had to be a rational reason behind them.

In his quest to study the paranormal, Kardec composed many questions about what the purpose of human life is on earth and the afterlife. He also penned questions about the nature of spiritual communication and how it worked. There were over a thousand queries in his notes. Many of these questions he posed to ten people who were self-proclaimed mediums. Apparently, none of these people knew each other. After asking his questions, Kardec documented how the mediums responded. After this study, Kardec believed that there were deceased people who were able to communicate to some degree in medium-inspired communications.

He compiled his queries and the medium responses into what he would later term Spiritism. This science, according to Kardec, dealt when the origin, nature and destiny of spirits and how they relate to the mortal world. He proposed some theories that he believed about mediumship.

First, Kardec was convinced that these mediums were able to give correct information unknown to themselves and the participants. This was usually personal information about the deceased loved ones. He was also fascinated that illiterate mediums could go into a trance and use unlearned skills such as automatic writing that were similar to the deceased own handwriting. Some mediums were able to speak and write in a foreign language they had never studied (also known and xenoglossy and xenography). When these mediums allegedly channeled people who were deceased, they correctly portrayed characteristics common to the deceased.

Kardec confided that it was actually a spirit who called itself “Truth” who suggested his pen name of Allan Kardec. His first book under the name of Allan Kardec was published in 1857 and was called “The Spirits’ Book”. Its contents comprised his interviews with the ten mediums and over 500 questions they answered about the spirit world and all about spirits and their relationship with mortals. The second edition of the same book had over 1000 questions answered. In 1858, he founded the Spiritism Society to further studies in spiritism and other psychic phenomena.

With the success of his first book and its second edition, Kardec wrote additional books that included “The Genesis According to Spiritsm”, “Heaven and Hell”, The Gospel According to Spiritism”, and “The Medium’s Book”. As a collection, this tome is better known as the Spiritist Codification. His wife was often a contributor to his philosophy and writings. The “Revue Spirite” was a periodical that Kardec published until he passed with an aneurysm in 1869. He is interred in his native France. After his passing, his wife continued his life’s passion until she passed.

Physical researchers such as Garbriel Denlanne, Charles Richet, and Camille Flammarion express that they were greatly influenced by Kardec’s research. Even though there are some fundamental differences, some of Allen Kardec’s Spiritism ideas influenced the British and American Spiritualism movement.

Even after his death, the philosophy of Allen Kardec continued to influence other spiritual thinkers. Today, there are Allen Kardec Study groups all over the world. They continue to use his collection of works to better understand the psychic phenomena around us. It is the goals of Kardec’s students to share the ideas of spiritism and to delve deeper into the “other side”. Like Kardec, they believe in using the scientific method for paranormal investigation and mediumship. His influence is just as strong today as when he was alive.