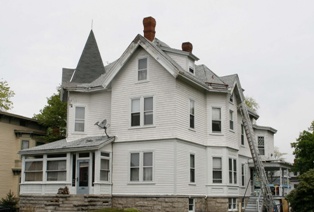 If you grew up in the northeast part of the country, you are most likely well aware of the Salem witch trials that occurred in Massachusetts. These trial are a part of the state’s history that is connected to a lot of the paranormal activity that is felt in that area, but if you are looking for haunted places to visit in the state, there are plenty of locations that you can visit that will keep you awake at night. Let’s take a look at some of them.

Lizzie Borden is a girl who was accused of murdering both her mother and her father. Though she was acquitted, the neighboring areas made up a rhyme about the brutal scene: “Lizzie Borden took an axe and gave her mother forty whacks. When she saw what she had done, she gave her father forty-one.” Visiting the house where the murders took place has been reported to give visitors an eerie feeling that someone is watching them, but if you are brave enough to experience the paranormal activity for yourself, you can rent a room in the house for a night.

Dogtown is a location that is named for the feral dogs that once roamed the area. The abandoned town started to become filled with individuals that led a shady lifestyle. They were said to be witches, and they wrote symbols and performed rituals to place a curse on anyone who entered the town that did not belong there. You can venture into the town, but be aware that it may still hold the curse that the witches placed on it so many years ago.

This cemetery, which is also called “the Eight Gate to Hell,” is a place where bodies have been buried since the 1740s. There are reports of eerie happenings occurring in the cemetery. Ghostly images and strange noises can be experienced in the cemetery. There have even been reports of suicides that have occurred on the premises. No one knows how haunted the grave site is, but with so many paranormal events occurring, it may actually be a gateway to the afterlife.

4. The Cursed Forest of Massachusetts

Forests can be creepy, especially when the visible pathways are covered with fog. Individuals who have gone into the Freetown-Fall River State Forest have experienced ghostly apparitions, poltergeist activity, mysterious orbs of light between the trees, strange disappearances, and even murders. In fact, there are a number of suicides that have occurred in this forest as well. A point of interest about this location, former President Ronald Reagan has reported going into these woods and seeing strange bright lights in the sky.

This theater is one of the oldest ones in America, so it has quite a bit of history behind it. Nothing bad has happened to cause evil spirits to linger, but the patrons who loved this theater are still seen on occasion. The balcony, which was deemed to be a fire hazard , looks like it is used on a regular basis. The spotlights tend to move without assistance. There is a nightmare room, in which visitors have reported having difficulty breathing on occasion.

The Lincoln Mill is an old abandoned building that used to be the home to an antique furniture shop. Those who pass by the building have heard cries for help coming from the mill. Years ago a girl drowned in a pond near the mill, and she can still be seen in the windows of the building from time to time as she watches people walk by the mill. If you listen closely, you can even hear scratches on the windows on the second floor of the mill.

Hoosac Tunnel is a railroad tunnel that is located in Adams County. During the 25 years that it took to complete this tunnel, more than 190 of the workers who were building it perished. After the construction was finished, various fatal accidents brought the death toll of this bridge’s creation up to 250 individuals.

Today, the workers and others who died in the bloody pit can still be seen wandering through the tunnel with a light leading their path. Eerie voices can be heard in the tunnel, but if you want to come and see for yourself, the tracks are still used, so be careful. Interestingly enough, the word Hoosac means forbidden in the language of the Mohawk Indians. Maybe we should have listened to their warnings.

Shelton Hall is a residence hall at Boston University, but what many are unaware of is that this building was one of the first Sheraton Hotels that ever existed. Before the hotel was turned into a dorm, a famous playwright died in room 401. Students have reported paranormal activity on this floor; the temperatures fluctuate and there are random knocks heard on the dorm room doors.

The elevator also occasionally stops on the floor like someone is getting off, but no one is actually there. The university feels that the floor is the perfect location for creative writers, but would you be able to brave a semester in a haunted dorm?

Rumors say that staff members at this hospital would take patients into the basement of the facility and essentially sacrifice them by using demonic rituals. One nurse who worked at the hospital admitted to killing 31 patients who were in her care. Today, you can hear screams in the basement as well as see unexplained markings on the walls.

As I stated earlier, the Salam witch trials are a major part of Massachusetts history, and the Joshua Ward House is a part of that history. Sheriff George Corwin, who was a cruel witch hunter of the time, was buried in the basement of this home, and his spirit is still lurking in the shadows. In fact, people have reported feeling like they were being choked while inside the house. A few of the souls that he accused of being witches and warlocks can still be seen in the house today.

Massachusetts is a state with a rich history, so if you want to know more about the paranormal activity that has happened at these locations in the past, take the time to visit the locations yourself.