Top 10 Most Haunted Places In Iowa 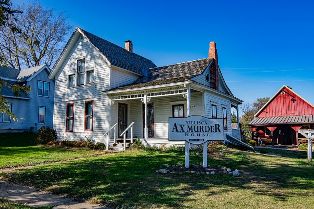 If you are visiting the Hawkeye State, you will most likely want to visit more than the Corn Belt that it is so well known for. This state is full of haunted places that will shake you to your core, and you can even spend the night in a few of the houses that have paranormal activity; that is if you are brave enough. Let’s take a look at some of what Iowa has to offer ghost hunters who are visiting the state.

This building served as a slaughterhouse for over 50 years. Before its closure, a gas leak caused an explosion that killed 21 on the employees that worked there. Since then, several fires have caused damage to the already damaged building, and even though the building was for sale, it remains abandoned and haunted by the spirits of the workers who perished there. The elevator has been noted to operate with no one inside, and strange voices and sounds can be heard within the structure.

In 1912, the Moore family was tragically murdered in their sleep by an ax murderer. The killer was never brought to justice, and the family has never been able to rest. Those who have visited the murder house have experienced green lights, cold chills, the feeling of an evil presence, and even the feeling of being pushed by an unknown force. Upon investigation of this house, ghostly voices have been recorded as well, which could mean that the family’s souls are still attached to the house. If you are looking for a thrilling night of paranormal activity, you can stay a night in the house if you dare.

Lucinda had planned to meet her lover at the Stony Hallow Bluffs, but when he did not arrive to run away and elope, she threw herself from the bluffs. Her body landed on the road below, and her spirit has remained there for decades. It is rumored that if you go to the location of her death and say her name, “Lucinda” three times in a row, she will appear and drop a rose at your feet. Anyone who receives a rose will die the next day.

The Blackhawk hotel was a place where many celebrities stayed while in Iowa. It is widely believed that Cary Grant died in the hotel on the eighth floor, and he is said to occasionally make an appearance in the hotel. The building changed hands several times, going from a low-income home for the elderly to a sleazy hotel. The eighth floor is also the location where a meth lab exploded, so it is a hotel that clearly has a shaded past, which has resulted in more than a few spirits wandering the halls.

All cemeteries have some sort of paranormal activity, but this one has a bronze statue of an angel that has turned black. Legend has it that if you kiss the statue, you die instantly. If you touch the angel, tragedy will follow you in life. Some who have touched the angel have actually gone insane shortly after. Any pregnant woman who walks under the wings of the angel will not be able to carry the baby to term. Each Halloween the statue turns a shade darker with the sins of those who have crossed its path.

The terror bridge is a place that has a horrible history. The most well-known story is one where a woman took her children to the bridge to murder them. As the train passed by, she tossed her babies onto the tracks to be crushed to death, and then she jumped to her own death. If you drive your car onto the bridge, make sure your doors are locked. Legend has it that the mother of the children can still be seen on the bridge, and she is still set on killing her children, so she will drag you from your car and toss your body onto the tracks.

Spirits have been noted at Rainbow Bridge, but it seems that the spirits that are hanging around this area are friendly. If you place a chocolate bar on the bridge at midnight and walks away from the bridge, when you return in five to ten minutes, the chocolate hat was located inside the wrapper will be gone, but the wrapper will remain unopened.

This location was home to the mentally disabled, the poor, and the elderly for nearly 150 years. More than 80 individuals have died in the manor, and not all of them have been pleasant experiences. Some of the souls of the patients still wander the halls. The spirit of “The Joker” is one of the many that haunt this location, but he is the most dangerous because he has been known to choke visitors. If you are willing to take the risk, Edinburgh Manor is available for overnight visits.

Nora Springs Bridge is located along a small secluded road in the town. A man who hung himself from the bridge years ago is said to still haunt the one lane railroad bridge to this day. If you park your car under the bridge at night, you can hear the rope swinging and him sobbing in the wind. There are even reports of individuals hearing knocking on the car doors and seeing handprints on the windows.

This is an old swing bridge that was originally constructed in the late 1800s. It has a tragic past. First, a woman who thought that her lover had died jumped to her death from the bridge. Her remains are still buried beneath the bridge, and she can be heard crying in the wind after daylight. A few years down the line, the bridge collapsed while two people were crossing it, giving the bridge more paranormal activity.

When you think of Iowa, you don’t typically jump to the thought of paranormal activity, but there are a lot of locations that are worth a visit, especially since some of the inns that are haunted in the state allow you to brave the night and investigate the paranormal occurrences for yourself.