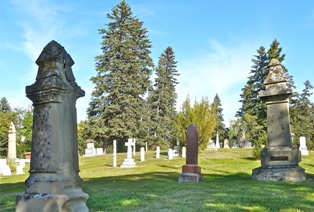 Connecticut, as one of the early New England colonies, is a state that has a long and storied history. Nestled among the history of this state is a series of paranormal locales that will raise the hair on the back of your neck. Connecticut has had a plethora of people living within its confines, and as a result, there’s been no shortage of spiritual activity. If you’re the type who wants to explore the paranormal, come with me on a journey into the otherworldly locales that are present in Connecticut.

No one really knows why some apparitions appear in color while others are monochrome. In any situation, the Union Cemetery in Easton, Connecticut is rife with the spirits of the unquiet dead. Most famous of the cemetery’s residents is the so-called White Lady, who is known to pull pranks on motorists – she’ll pretend to be hit by a car that’s driving by. As a matter of fact, the White Lady has even been captured in still shots and even on video. In addition to the White Lady, an apparition called Red Eyes has been experienced as well. This spirit shows up as two ominous red eyes that glow in the darkness.

The factory in Remington Arms, which is in Bridgeport, Connecticut, is well-known as a hotbed of haunting phenomena. A manufacturer of guns and ammo, Remington Arms was a perfect example of the unsafe factory conditions that were prevalent during the turn of the 20th century. The factory clearly put an emphasis on production rather than its employee’s lives; and as a result, many lost limbs, were injured in other ways, or were even killed. Today, disembodied voices and screams can still be heard.

Connecticut has a rich history of state-run mental hospitals. The unfortunate result of this is that many of the tormented souls who called these places home refuse to leave, even after they’ve shuffled off this mortal coil. The Fairfield State Hospital, during its most populous period, was home to more than 4,000 mental patients. There was electrical shock therapy, full-frontal lobotomies, and just the general mistreatment of the mentally ill. After its closure in 1995, strange sounds have been heard; and as a result, the hospital has gained a reputation for being haunted.

Naugatuck’s Gunntown cemetery has kept the dead since 1790. In fact, the site has a host of colonial-era plots that house the mortal remains of both colonists and their British rivals. At night, the voices of small children can be heard. In addition to these unsettling sounds, a man is often witnessed in this area who is leading his horse around with a lantern. This is one of the places that actually has video and electronic voice recordings to attest to its truly haunted nature.

Can you believe there’s another mental health facility? As a matter of fact, the Seaside Sanatorium started out as a facility that treated children with tuberculosis. As time progressed, the building came to be the home of mental patients. Then, in 1970 it came to light that the sanatorium’s patients were being grossly mistreated by the staff, and by the 1990s, patients were beginning to die at an elevated rate. As a result, the sanatorium was closed in 1996 and in most situations that would be the end of it. Unfortunately, visitors to the closed sanatorium started to hear disembodied voices and witness strange apparitions, making the Seaside Sanatorium a very interesting place to visit if you’re into paranormal activity.

Our next Connecticut site is a big surprise, right? Here’s another abandoned mental hospital for your paranormal senses. Unfortunately, this is another example of a mental facility where barbaric techniques were used to “correct” the mental states of its residents. As a result, the voices of these tormented individuals can still be heard. In addition, there is a deep sense of foreboding present in this hospital and the sense of something lurking just out of sight.

The New London Ledge Lighthouse, or the home of “Ernie” the lighthouse keeper, was built in 1909. Today, you can still hear loud whispering noises that resound through the body of the beautiful lighthouse. Amazingly, in the crew’s log, an inscription can be read that states, “Rock of slow torture. Ernie’s domain. Hell on Earth – may New London’s Ledge’s light shine on forever because I’m through, I will watch it from afar while drinking a brew.”

Bara-Hack is an abandoned Connecticut settlement that has a haunted history. The area was settled by the Welsh in 1780, and those who visit the area can still hear the sounds that originated in the colonial era. Just walking through Bara-Hack a visitor will hear children playing, livestock, and the sounds of pre-industrial forging.

A training school sounds like a nice break from the mental hospitals that we’ve featured on this list, right? Actually, no – the Mansfield Training school, which is part of the Depot Campus of the University of Connecticut, was once a mental hospital where the residents were treated poorly. As a matter of fact, the school was once named, “The Connecticut Training School for Feebleminded.” As with most haunting phenomena in these settings, this school is rife with otherworldly screams, moans, and the manifestation of spirit orbs and mists.

Our final haunted location is the Little People’s village, which was once thought to be the home for pixies. This was actually proven false; the location was just a roadside attraction that could be visited by motorists. In any case, the location has drawn in a number of paranormal enthusiasts due to its throne, which has a supposed curse. If you sit on this throne it’s said that you will die within the next seven years. Additionally, people have reported strange lights at the location and the presence of fey folk as well.

Connecticut with its long history was bound to have its share of haunting and paranormal phenomena. Pay a visit; you’ll have a great time exploring this colonial state’s rich haunted history.