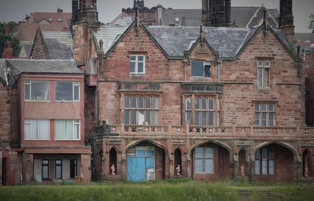 When many people think of New York, they think of the hustle and bustle of The Big Apple. While the city has a number of haunted locations that are of interest, when you step outside of the city limit’s you can find a whole world of paranormal activity and haunted locations to visit. Let’s kick off our Empire State road trip and find some truly thrilling haunts.

This charming home in Long Island New York is most likely a location that you have heard of. It is the place where a 23-year-old man murdered his parents and his four siblings. The next family that owned the home, the Lutz family that we have seen in the media related to the house, only lived there for a period of 28 days. When the family lived in the home doors were heard slamming, footsteps were heard, and strong odors could be smelt throughout the home.

Appliances seemed to have a mind of their own, and the members of the family would often experience a shift in mood that was unexplained, like the fact that George Lutz would go to the boat house at the exact time that the murders occurred every morning. Today, going inside the home is not allowed, unless you want to purchase the home, but seeing it from the sidewalk is more than enough for most ghost hunters.

The Rolling Hills Asylum was originally a 19th-century poor house where over 19,000 individuals died. Whether the inmates in the asylum were sent there because they were mentally disabled, poor, elderly, or blind, they would all suffer the same mind altering drugs and shock treatments, which often made them worse off than when they arrived at the facility.

The patients who were sent here often never left. A man named Roy who was seven feet tall can be seen crying in the darkness. Inmates wander the halls and doors often open and close on their own.

The Sagamore is a luxury hotel where many guests have found eternal rest, if you want to book a room here, be aware that you may not be alone. The reports from guests at the hotel indicate that these spirits are simply guests who do not realize that they have passed on. Some guests can be seen entering rooms, while many of the apparitions seen at the Sagamore simply love the view of Lake George. A young boy who used to sell golf balls is still seen on the green today.

Utica State was the first state-run hospital for the mentally ill in New York. Patients who lived here were treated inhumanely. They received lobotomies and electroshock therapy on a regular basis. The living quarters were cramped and filthy. Instead of trying to calm misbehaving residents, they were simply locked in a cage. In 1973, the building was closed to the public, but screams of patients who are long gone can still be heard coming from the hospital.

In 1757, Fort William Henry was lost. The French invaded the stronghold during the French and Indian war. Hundreds were lost in the bloody massacre, and even though the building is not standing currently, the museum that was built on top of the burial grounds where all those individuals were murdered is still haunted. One ghost who roams the halls is known to enjoy slamming the door in the face of the guides who give the ghost tours here.

Many people believe that cemeteries are haunted, but this one is the site of true tragedy. A number of children are buried in this cemetery, and the ghost of a seven-year-old child who was mentally disabled was sadly stoned to death in the graveyard. She was buried in the same cemetery. Electronic devices like cameras and flashlights tend to fail when you get close to Gurnsey Hallow and moaning can also be heard.

Letchworth Village is an asylum of 130 buildings that was intended to care for those who faced physical and mental disabilities. Instead of caring for the individuals who lived there, the halls were filled with neglect, torture, rape, and even murder. Polio vaccinations were tested on the children that lived here. At first, it was done one at a time, but once a child lived, 19 more young individuals were injected. When a child died, their skull was removed and their body was tossed into an unmarked grave. The cries of these mistreated children can still be heard today.

Spook Hill is a location where the unexplained occurs. If you drive your car to this location in Yates County, go to the bottom of the hill and place your car in neutral. In a matter of seconds, your car will begin coasting on its own up the hill. According to the legends of this area, an old Indian burial ground is located nearby Spook Hill.

Union Station in Utica New York is known to have a few ghosts around. About a dozen passengers of two derailed trains still walk the tracks as well as the conductors who were driving the trains. There is also another accident that may have left two more souls behind to wander the tracks. Conductors can often be seen pacing the platforms at night and ghostly passengers often occupy the trains as they enter and exit the station.

Home to more than 9,000 patients, this small community was also the location of electroshock therapy, insulin shock therapy, and full-frontal lobotomies. There are a number of underground tunnels that connect the numerous buildings where patients can be heard moaning, crying, and screaming in endless torture and abuse.

New York is a state where a number of hospitals, hotels, and asylums can be found; these buildings were locations where abuse and misfortune happened on the regular, and many of those who suffered in these facilities are still lurking the halls today. If you are looking for a true paranormal story that has a history in the state of New York, then let the road trip begin.