Top 10 Most Haunted Places in Indiana 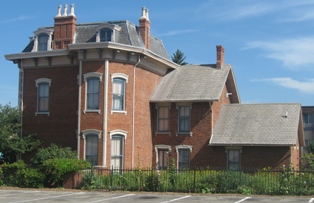 Indiana is one of the states that enjoy a rich history. As you might have guessed, the sometimes unfortunate result of a rich history is that there’s plenty of room for haunting phenomena.

In this realm, Indiana is rich as well. Let’s take a look at some of the most haunted locales in the state of Indiana.

These places are perfect for the paranormal aficionado; each has a deeper story that is sure to excite and terrify.

While everyone has heard about its bridges, have you actually heard about the ghosts of Madison County? The Gruenewald house is just one of the reported hotbeds of paranormal activity in the region; there’s also a heavily haunted Maplewood Cemetery nearby that has two statues of two children that have been reported to move around and play at night. The house itself has ghastly sounds, moving furniture, and the appearance of black and white apparitions.

There are few places that are spookier than a cemetery. The Boone-Hutcheson Cemetery has a unique apparition that is relatively uncommon; this cemetery is haunted by a policeman from the 1950s. This departed officer of the law seems to be on constant, never ending patrol and shines his ghastly blue light around the cemetery’s premises. Phantom red-eyed dogs also have been known to manifest around the cemetery; providing frights for anyone visiting the cemetery at night.

Whether the manifestations that have occurred in this state park are actually paranormal is up for contention, but many people have reported seeing blue-gowned dwarves appear spontaneously in the park at differing times. While this may seem strange, some think that these are actually a loss tribe of little people called the Puk-wud-ies. This tribe is part of the Deleware Indian legend, and whether these individuals are spirits or a real life tribe is unknown.

Many of us are unnerved when we travel through cemeteries, especially when we have to do so at night. This is a natural reaction as cemeteries definitely house the spirits of our honored and not-so-honored dead. The Circle Hill Cemetery, which is located in Angola, Indiana has been a site that has had many reported manifestations of the spirits who live there. The most famous of these manifestations is a tall black hooded figure who calls the cemetery home. Additionally, the nearby fraternity house is said to be haunted by a girl who died there.

This bridge has a heartbreaking story that starts with a mother who was walking with her baby on some railroad tracks. Unfortunately, the mother and her child fell to their deaths on this bridge and still remain in the area until this day. As a result of their tragic deaths, you can still hear the mother’s cries of anguish when you drive underneath the bridge. As a matter of fact, most motorists honk their horns so that they don’t have to hear the heartbreaking cries.

Looking for a meal as well as a paranormal experience? The Hacienda Restaurant in Mishawaka was once a private mansion that was converted into the Mexican eatery that it is today. Now, the spirits of the tortured souls who lived here still reside. The owners of the mansion are rumored to be a maid who was carrying on an affair with the owner. After she was shunned due to pregnancy, she hung herself and continues to serve, even in death. Another apparition that’s been reported is the owner himself, who shot himself in the basement of the manor.

With a name like the Whispers Estate, you might expect that there may be paranormal activity in this area of Indiana. Located in Mitchell, Indiana, this estate is the home to a variety of apparitions. At night, you can hear voices that alternatively wail, moan, and converse. This place is known as a home to other manifestations as well. During the late night hours, doorknobs will jingle, the floor will quake, and odious smells will proliferate certain areas of the estate. Visitors have even noticed swirls of light and orbs.

The Hotel Attica was a famous Indiana institution and was very popular during its early years. In recent times, a glowing spirit has been witnessed in several rooms during the late night hours. In addition, guests have reported hearing moans and voices, and some have even had their closet doors open and shut at random. Some guests have even reported hearing ballroom music that must have originated in the era that served as Hotel Attica’s heyday.

Around the country, colleges often are some of the oldest institutions available; and as a result, there are often dorms and halls that also have recorded apparitions. The Le Mans Hall in Saint Mary’s College is one of these haunted locales. From time to time, students have reported seeing the spirit of a girl who hung herself in the Le Mans bell tower. This suicide seemed to adhere to the firmament of the hall, and you can even see the poor girl’s noose from time to time. Additionally, in the infirmary, you can also see blood stains from another girl who died in that area.

I know that the last place you expect to witness paranormal activity is in an Arby’s, but when you order your roast beef sandwich, be on the lookout for apparitions. The ghost of a large man has been witnessed at the Arby’s in Anderson, Indiana and sometimes he can be seen in the lobby or at one of the tables. As a matter of fact, sometimes one of the bathroom stall doors swings open on its own at night. While you can often feel and witness his presence, this haunting seems to be benign.

We hope you enjoyed my little list of paranormal locations. Indiana has a plethora of great paranormal experiences for anyone to enjoy. You can visit their numerous haunted cemeteries or visit any of a handful of manor houses that house the unquiet dead.