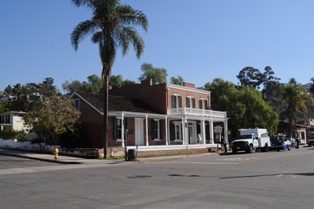 California is the country’s most populous states and you can expect that in its 166-year history that there’s been some paranormal activity. As a matter of fact, the Golden State loses a bit of its luster when you take a look at all of the haunting activity that’s been reported in California. For those who are ghost hunters, the state offers a plethora of paranormal thrills that are unlike any of the other haunted locations around the country. Let’s take a look at ten of the most interesting haunting in the Golden State.

I wouldn’t be surprised if you’ve never heard of Scotia, California; it’s a very small town that few have heard about. This small Californian town is rife with its share of paranormal haunting, but no place in Scotia has had more paranormal activity than the thoroughly haunted Scotia Inn. The inn has a wide variety of ghosts that are checked in for eternity, but none is more famous than the perennial resident named Frank. Fortunately, Frank is a friendly apparition that can actually be quite helpful to the hotel’s visitors. You can even play ball with him.

If you happen to be searching for haunting phenomena in or around San Diego, then you should definitely check out the Whaley House. As a matter of fact, according to the Travel Channel’s America's Most Haunted, this historic site is the number one most haunted house in the nation. Since its foundation, the Whaley House has been the site of hangings, suicides, and straight out murders. As a result, you can find apparitions of famous residents like Yankee Jim, who was hanged at the location, and Thomas and Anna Whaley, who lost their daughter to suicide and never left.

The long defunct prison was the home of a lot of negative experiences and feelings; and as a result, many of the disquiet dead reside still in its tortured walls; constantly awaiting a reprieve from their sentences. Today, tourists consistently report hearing anguished screams, banjo music, and actually seeing the disembodied spirits of the 87 men who died on the island. As a matter of fact, tour guides have reported slammed cell doors and some have even have had a hard time breathing near the cells.

Just about everyone in California has heard about the grisly and unsolved Black Dahlia murder of the 1940s. The Black Dahlia, which was the nickname of the victim, Elizabeth Short, has occupied the interests of many a fan of Hollywood’s Tinseltown era. Unfortunately, after her murder, Elizabeth has made several afterlife appearances. At the Millennium Biltmore Hotel, several apparitions have appeared; with Short being the most popular. In addition to the Black Dahlia, undead nurses, a boy without a face, and a little girl have been spotted at the hotel.

What’s more scary than a dilapidated mental hospital? How about a dilapidated mental hospital that served its final years as a slaughterhouse. The Scary Dairy is simply rife with death, so it’s not at all surprising that there has been reported paranormal activity in its vicinity. On top of the scores of dead livestock, there have been several murders in the area as well, and now, visitors report screams, frightening apparitions, and a prevalent sense of dread. If you’re going to be in Camarillo, Cali, pay a visit to the dairy.

In its heyday, the Alexandria Hotel was quite a swanky place to visit. The affluent hung out there and it was also known as a place where presidents visited. Since its construction, the Alexandria has become known as a place of low-income housing, but to this day, people have reported seeing ghostly dancers in the ballrooms. Looking to become starstruck by a famous apparition? Well the famous Rudolph Valentino is said to still lurk within the halls of the Alexandria. For the most part, the departed seem to be benign; save for an angry teenager who loves to frighten residents.

Located in Hanford, California, Bastille was a prison that suffered a ceiling cave-in in the 1960s. After this disaster, the locations turned it up a notch and housed a nightclub and some restaurants. All seemed well until the pots and pans in the kitchens started to move of their own accord. In addition to this, some of the employees started to report a palpable sense of otherworldly dread.

The Sierra Nevada House was established in Coloma, California in 1850. During this time, California was smack-dab in the middle of its famous gold rush. As a result of the era, there were many claims jumped, and a series of grisly killings that mostly went unchallenged. Since those days, the Sierra Nevada House has been destroyed by fire several times. Despite this, many who visit the site consistently report seeing black-and-white apparitions of those early gold rush pioneers. The most famous apparitions are a beauty named Isabella who shows herself to visitors in the house’s mirrors and an old man who loves to grin at visitors.

Let’s be honest, no one likes walking through a cemetery. Its connection with the dead and the palpable feeling of dread that seems to stem from these locations tend to make people want to stay away from them. The Adelaida Cemetery in Paso Robles houses several wayward spirits who like to make their presence known to the living. One of the most famous is young Charlotte Sitton, who still wanders the cemetery grounds on Fridays. Charlotte is often called the Pink Lady and spends her time placing ghostly flowers on the graves of her children who died of diphtheria.

The Georgian is located in Santa Monica and was once the tallest building in town. It had a beautiful view and was one of the most famous hotels in the area. Eventually, it fell into disrepair and became apartments that were once again converted back into hotel rooms. Since it’s revival as a hotel, there have been reports that calls have been made from vacant rooms. Employees even hear a disembodied, “Good Morning” from its apparitions from time to time.

California is the place you ought to be if you love to explore the paranormal. The state has a rich history that’s full of otherworldly happenings that are just waiting to be explored by the brave.