The Battlefield in Gettysburg: A Haunted Place of Conflict 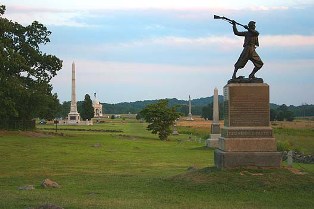 The battle of Gettysburg was a horrific three-day fight that was essentially the turning point of the Civil War. Over 50,000 men lost their lives during the 72 hour period, and all of the death and suffering that was experienced on the battlefield left the location a haunted place to visit, even more than 150 years after the bloody events occurred. Let’s take a look at some of the manifestations that have been seen on and near the battlefield.

This slope was a strategic location during the battle that gave an advantage point to the Union troops because they could see into the valley below. Today, apparitions of soldiers can be seen marching in formation at the top of the hill and riding into battle. Some have even seen a headless man at the front of the formation leading the troops well after his decapitation.

Devil’s Den is a rocky hill that is located in the Valley of Death. The bodies that met their end on these boulders were left to rot deep within the crevices between the unmovable rocks. The battle of the Crows also took place here years before, so not only can visitors see Union and Confederate soldiers, they can see Native American Warriors as well. On occasion, you can also hear gunshots, cannon fire, and drums in the far corners of the field.

There have been many instances where cameras have ceased to function at Devil’s Den, and it is likely due to the fact that a photographer named Alexander Gardner thought that it was a good idea to position the remains of the deceased soldiers into a good pose for the newspaper. The spirits of those soldiers are said to jam cameras, toss them to the ground, and stop them from functioning completely in the area. One soldier; however, seems to take a liking to the visitors and often poses in pictures that they are attempting to take.

This is the location where three Confederate soldiers were hung for deserting their post during the battle. A shadowy mist can be seen near the bridge, and some visitors have reported hearing screams coming from the covered bridge.

During the time of the war, this was the home of a Union soldier who found out that his brother had betrayed them and was fighting for the confederate army. According to history, Private Wesley Culp was the only soldier to die during the attempt to take the hill. His sisters secretly buried his body, but today his presence can still be felt on the second floor of their home.

This stone house served as a field hospital for the Union soldiers, but unknown to those who were taking care of the wounded, Confederate soldiers were hiding in the attic and the basement of the home. They were eventually found and killed, but their presence still lingers in the home. You can hear pacing in the attic and there is even a door that opens slightly like someone is peeking out; it even happened after the door was secured with nails.

This was another medical facility that was located near the front lines of the battle. It served as a hospital for those who needed amputations. A confederate soldier named William Barksdale was sent here with a fatal wound. Sadly, his voice can still be heard calling for water to this day.

Jennie Wade was the only civilian to die during the Civil War, and her death was the result of a freak accident where a bullet entered her sister’s home where they were making bread for the Union soldiers to enjoy. The bullet from a Confederate sniper’s gun penetrated two wooden doors and pierced Jennie in the heart. She died instantly, but because of her unforeseen death, she still can be seen in the home.

Soldiers from both sides of the battle used the area called Pennsylvania Hall that is located on the campus to treat the wounded. Students who are enrolled at the college today often experience apparitions of wounded soldiers and generals. One of the most famous sightings occurred when two administrators took the elevator down to the basement and found themselves inside of a Civil War hospital that used to be located there.

Though the battle occurred over a century ago, the pain and suffering that happened let the souls of the deceased restless. Until they find the peace that they need to leave this earth, the battlefield in Gettysburg will remain a haunted place of conflict. If you are visiting the Gettysburg area, check it out for yourself.