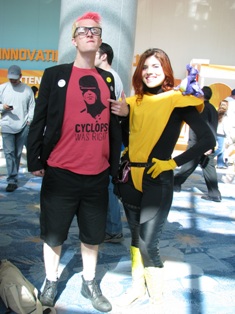 As a person who is both a comic book fan and who also has a strong connection to the spiritual through a spirit guide, I find myself loving psychic characters in my favorite comics. While there are many characters with very strong, very unrealistic psychic abilities, I still have loved to read about their adventures ever since I read my first issue of X-Men.

Today, I thought it’d be cool to share some of my favorite comic book telepaths with you, in no particular order:

1. Professor Charles Xavier (X-Men) – It’s literally impossible to imagine a comic book telepath and not think about Charles Xavier of X-Men fame. Charles is an omega-level mutant (the strongest) and has telepathic abilities on a global scale; in fact, he once had the ability to telepathically read anyone on the planet, which was an ability that was limited by his nemesis Magneto.

2. Jean Grey (X-Men) – While Jean’s telepathic abilities are often depicted to be right under her mentor Charles Xavier’s, her telekinetic abilities have often be shown to be without equal. Also, as the sometimes host of the psionic entity the Phoenix, Jean can have more raw psychic power than the majority of characters in the Marvel Universe.

3. Quentin Quire (X-Men) – Quentin Quire is a character who’s moral compass is often depicted as being somewhat off. Even though this is the case, Quentin has been shown to care about the safety of others. This is fortunate because, once again, Quentin is an omega-level psychic. He manifests both telepathic and telekinetic abilities and has been known to subtly influence the minds of those who are around him so that they can easily fall under his control.

4. Doctor Strange – Having been featured in a recent film from the MCU has been a great boon for this character. Despite having origins that span back to the 1960s, Doctor Stephen Strange has flown under many people’s radars for years. This is unfortunate because Doctor Strange has vast, mystically-enhanced telepathic powers that put him on par with any of the other psychics on my list.

5. Doctor Druid (Avengers) – While Doctor Druid is somewhat obscure, this former Avenger is a telepath that also has been shown to have the ability of hypnosis. Like Doctor Strange, Doctor Druid also has mystical abilities that make him a powerful opponent to any villain.

6. M’gann M’orzz (Teen Titans, Young Justice) – The “niece” of Justice Leaguer J’onn J’onzz, white Martian M’gann is one of the more powerful psychic characters in DC’s comic universe. Combine this with her natural Martian abilities of shapeshifting and density manipulation and you’ve got a very powerful teenager.

7. The Spectre – The Spectre is one of the most powerful characters in the DC universe. Often depicted as the embodiment of the Wrath of God, the Spectre has more than just psychic might; he also has reality altering powers as well. In fact, he could mind-wipe multitudes of minds simultaneously.

8. Moondragon (Avengers) – Heather Douglas has always been an interesting character. When mad titan Thanos first debuted, one of his first acts was to almost completely destroy the Douglas family. While Heather’s mother was killed in the car crash, her father was resurrected to become the hero/anti-hero Drax the Destroyer. Heather, on the other hand, was rescued and sent to Saturn’s moon, Titan, to learn from the Eternals that lived there. Heather is pretty unique to this list; she is a baseline human and has strong psychic powers through will and training alone. As a result of her training, Heather has used her telepathic powers to influence entire planets and is also a low-level telekinetic as well.

9. Cosmo (Guardians of the Galaxy, Nova) – Cosmo is one of my favorite characters. The unfortunate test subject for the 1960’s era Russian space program, Cosmo, who is a dog of an undeterminable breed, was lost during his original space mission. What his Soviet researchers didn’t know is that somehow, Cosmo was shunted to the interdimensional location of Knowhere. Whatever energies sent this dog to this remote location also seemed to bolster his intelligence and gift him with powerful psychic abilities. As a result, Cosmo now serves as the powerful chief of security of Knowhere; a job that he almost enjoys as just being a dog.

10. Franklin Richards – Franklin Richards, the son of Reed and Sue Richards of the Fantastic Four, is one of the most powerful mutants in the Marvel Universe. His psychic powers are on par with Professor X’s abilities, and he also has a plethora of other unique abilities that place him in a league with cosmic characters like Galactus.