The 10 Most Haunted Places In Ohio 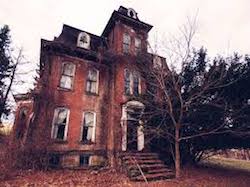 I recently traveled to Ohio to visit a friend who has been telling me about all of the spiritual energy that is present in the state.

I took it upon myself to do some research find out exactly how real these hauntings were. It turns out that my friend was right, there are countless haunted locations in Ohio.

Letâs take a look at 15 of the Buckeye Stateâs most famous hauntings.

Restless spirits wander the secret passageways of this four story mansion. Death and sickness plagued the family who lived in the home until they were all dead. At that point, the mansion was sold to the German Socialist party in 1903, and it became the location of more gruesome deaths and brutal murders. Visitors have noted paranormal activity such as spinning lights, doors flying off of their hinges, and a baby who cries consistently in the mansion.

No one knows what really occurred in this mansion. The legends differ greatly, but they all result in death and deception that has left the property haunted by the spirits of those who were wronged. According to legend, the original owner locked his servants in the basement until they escaped and murdered his entire family.

This building is what remains of an overcrowded insane asylum where the patients were mistreated and abused. The cemetery of the asylum is said to be haunted, and there is an outline of a patientâs body on the top floor. The story is that she became lost in the halls for over a month, and the stain is the location where her body was found. The stain has been there since 1979, and all efforts to remove it have failed.

A tragic fire occurred on the campus that obliterated a dorm. The nine students who were trapped inside still roam the halls today. Several other buildings on campus are haunted as well. Two students who died in a tragic accident can be seen at the hill theater and a student who committed suicide still expresses a deep seeded anger in Lewis Hall.

This theater was the talk of the town until the influenza outbreak of 1918 when the space was used to store the corpses of those who had passed from this world. Today, a young girl can be seen in the theater. She has been recorded asking how she can get out of the building.

This is the site where a local man went on a murderous rampage. He is said to haunt the roads in this area, causing car engines to suddenly fail, leaving motorists stranded. Some even say that old man Stanleyâs ghost can be seen in the middle of the road.

The ghost of a girl who committed suicide can be seen in the theater. She allegedly jumped out of the theater and into the canal below. Anyone who walks along the canal at night can hear the sounds of the girl weeping to this day.

In the early 1970s, the federal government gave the order to have this town evacuated. No one knows the reason for the sudden evacuation, but the ghosts of the residents of Boston Mills who refused to leave their homes still wander the abandoned streets of this ghost town.

The park is home to the original canal system that was built in the 1800s. The work was dangerous and often deadly for the workers. The ghosts of the workers who died tragically during this time can still be seen in a few of the canal locks.

If you are interested in the world of paranormal activity like I am, make a trip to Ohio to see these sites for yourself. The tragic stories behind these haunting are an interesting part of the history of Ohio that is often left untold.