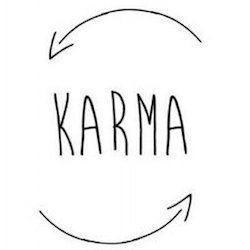 Do you believe in karma? Many people do, but there are still those that are skeptical that karma exists at all.

If you toss a pebble into a pond, the ripple affects the water around it and carries the energy of our action.

Whatever you do in life, will come back to you. Karma is your bond to the past. It is the way that the universe teaches you; helps you to reflect and learn from your mistakes.

If you do good things in life, good things will happen to you. The same is true of bad things, so be kind to people and consider what it is like to walk in their shoes. If you still do not believe in karma, let’s explore some stories that may change your perspective.

1. A man and a woman were engaged, but the man decided to call of the wedding. This made the former bride to feel ashamed and brokenhearted, which led to her taking her own life. Her brother found her body, and decided to take revenge on the man. He shot his sister’s former fiancé and then took his own life. The bullet that was meant for the fiancé only grazed him and it ended up being lodged into a nearby tree. A few years later, the man decided to remove the tree because it was a constant reminder of his troubled past. When the dynamite exploded, the bullet flew through the air into his head, which of course ended his life in a second.

2. During a cruise to the Bahamas a game of snowball bingo grew to $5,000. The winner of this game would be walking away with quite a prize. Before the bingo game began, an announcement was made that a diamond necklace had been lost. The lady who lost the piece of jewelry was extremely upset as it was a gift from her late husband, and it was dear to her heart. Before the jackpot round began, a lady stood up from her seat and walked up to the stage where bingo was being called. She had spotted the necklace on the floor in front of her seat, and was returning it to its rightful owner. The next game of bingo was the one with the snowball jackpot prize, and the kind, considerate lady who returned the necklace walked away with $5,000.

3. A homeless man who was down on his luck was asking the community for help by sitting with a donation bucket. Not everyone donated, but one lady who did also lost her engagement ring in the bucket. It looked to be an extremely expensive ring, and the homeless man needed money, but he decided that the ring was far more valuable in the hands of the individual who lost it. He returned the ring, and not even a month later he had found a place to live and received donations from members of the community that totaled over $100,000.

Karma is real, and it always comes back to you. If you treat someone badly, you will feel negative energy as a result. Your future is truly an echo of your past, so always be grateful for what you have. Help others when they are in need; you never know when you will be the one who needs their help.

There is good and bad all around you, reflect on what you see and radiate the positive energy that is within your soul. You will occasionally slip up and fall to the negative energy that surrounds you, but when that occurs, ask for forgiveness.

If someone hurts you, don’t seek revenge. Revenge brings out negative energy that will come back to you. Wish the person who caused you harm well and move on with your life, karma will come back to them, and it will be a more powerful lesson to them than your revenge could ever be.

Karma is not something that happens immediately – though it can, but for the most part, it often happens over time. Karma is a seed that is planted. It will grow, and the moment that a valuable lesson can be learned, karma will be there to help make you a better person. Your choices are your own, but remember karma is impossible to avoid.